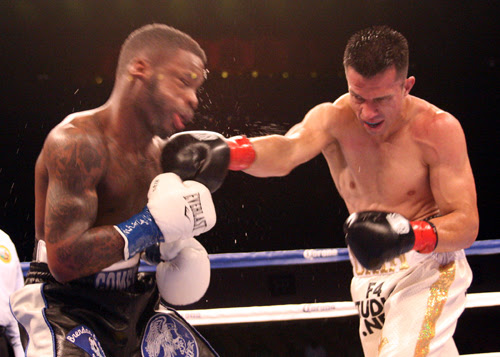 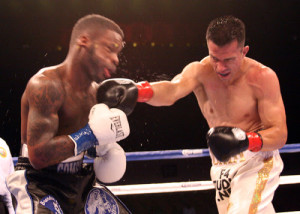 After extending his winning streak to 9-fights in a row, Gary Shaw Productions super-welterweight contender, Francisco “Chia” Santana (21-3-1, 10 KOs), is looking forward towards fighting for a regional title by the end of the year.

Last night at the Chumash Casino, Santana defeated Luis Alfredo Lugo (13-21-1, 5 KOs) by way of a fifth round TKO.  With the win, Santana feels he’s ready to fight all top contenders, especially after his most notable win, a unanimous decision victory against former undefeated New York native, Eddie Gomez (16-1, 10 KOs)

“With each fight, I feel I’m improving,” said Santana. “I believe in myself and I work very hard in the gym, so every time I step in the ring I’m putting everything on the line, with the hopes of landing a big fight against a top contender.  I know I’m a few fights away from fighting for a world title, but that is my ultimate goal.  I know with Gary Shaw, I can accomplish this goal if I keep winning.  Hopefully by the end of the year, I can fight for a regional title.  I ready to step up in competition.”

“Santana has the heart of a champion and I’m very proud of his progress since we signed him,” said Gary Shaw. “He’s on a roll winning his last nine fights.  Against Eddie Gomez, he went in as the underdog and came out on top, like a true warrior.  I’m going to see what we can do to get him in position to fight for a belt with one of the sanctioning organizations.  As of right not I feel he should be ranked top ten across the board.  We’ll be making an announcement on his next fight in the near future.”