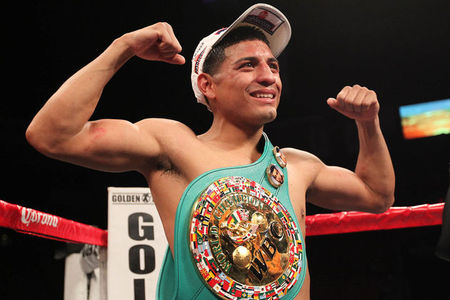 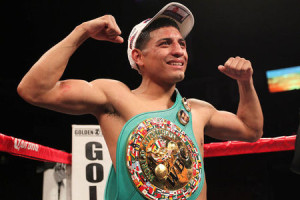 Abner Mares made a decision a few months ago to switch up his training team. He announced that he was going under the tutelage of 2011 “Trainer of the Year” Virgil Hunter and then defeated Jonathan Oquendo by unanimous decision through 10 rounds in his debut with Hunter last month.

It was a somewhat curious decision on the part of Mares, but it had nothing to do with Hunter’s credentials because he is one of the best trainers in boxing today and has proven what he is capable of doing with fighters such as Andre Ward, Amir Khan, and Alfredo Angulo.

However, it was interesting as to what Mares saw in Hunter that made him believe they’d mesh well. It was more a question of styles as opposed to quality. At the end of the day, Hunter’s vast and versatile stable suggests he is capable of adapting his methods to a particular fighter.

“I’ve been feeling good with the training situation, training with Virgil we clicked right away. We understood each other. I was doing things the way he wanted me to, if not better,” Mares said in an exclusive interview with Thaboxingvoice.com.

Mares acknowledged the fact that things don’t always go as accordingly in a fight as planned for in camp. But he feels that expectations were surpassed and he is more than satisfied with Hunter’s instructions and feels that he has made a notable impression on Hunter in the process.

It’s a process after all and one fight under a new trainer is not enough to gain real strides, not to mention that Mares was coming off of a serious layoff with his previous fight — a first round KO loss to Jhonny Gonzalez — taking place 11 months between his last. It was his first loss and it was a devastating one, but if you consider the fact that it was a first round knockout then in reality he had gone 14 months without game time activity.

That is a lot to factor in and both Mares and Hunter had their work cut out for them in that last camp.

“I did feel sluggish and the time [off] did hurt me. Nevertheless, I did a lot of the things that Virgil wanted me to do, which was box and not stay there and go toe to toe with the guy. I won every single round against a fighter that’s been active and hits hard, and one that is difficult to comeback against.”

Mares admits that he only had a six week camp with Hunter in the lead up to the Oquendo fight and he is anxious to get his first full fight camp under Hunter.

As stated previously, Hunter’s stable is full of “A-List” fighters and it can be difficult to make an authentic connection with a trainer whose attention is pulled in many directions. But the opposite is true for Mares and he is positively affected by the amount of talent that surrounds him and he takes comfort in knowing his trainer is responsible for grooming some of boxing’s best.

“Just knowing your trainer trains [some of the best] fighters is exciting by itself and knowing you can learn a thing or two from them. I find myself sometimes just sitting down and watching Ward spar or hit the bags, same thing with Berto and Khan. All these fighters feed you the energy that a team needs. I’m blessed to be a part of that team, the “A Team” as I say it,” Mares said.

Mares coined the term “A Team” for Hunter’s stable because most of his elite fighters’ first names begin with the letter ‘A’ (i.e. Andre Ward, Andre Berto, Amir Khan, and Abner Mares). It is as catchy as it is fitting.

Mares draws strength from his teammates and said that he was inspired by a mention he received in an interview with Ward where Ward praised Mares’ sparring sessions. That day Mares found himself eager to get to the gym and trained with an extra pep in his step. “You do want to impress your teammates and colleagues, along with the fans,” Mares explained.

Mares is currently without an opponent for the remainder of the year, but he says that the plans are for him to fight in November or December.

It would be understandable if Mares chose to take a lesser opponent in his next fight then we’ve become accustomed to seeing him in the ring with. Mares has built a strong resume and he had a run of very tough opponents consecutively over the past three years.

“I’ve been that type of fighter that people know me as, the Abner that takes on any tough fight with no problem. But this last fight I had to take a step back, knowing that I’ve been out for so long, I had to fight a fighter such as Jonathan Oquendo, not disrespecting him or his level, but obviously he was not at the level that I’ve been used to fighting at, but it was still a tough fight.”

There have been talks of a possible featherweight tournament involving the best featherweights in boxing today and Mares’ name has come up in the conversation along with Nicholas Walters, Nonito Donaire, Evgeny Gradovich, and Vasyl Lomachenko. A fight with anyone of these top featherweights would be huge for Mares, but would it be too soon?

Mares seems matured ever since suffering his first loss and it is clear that he took a genuine lesson from it. But I think there is more to it. Aside from quality training, Hunter appears to have provided Mares with some very necessary guidance.

Mares was on the fast track to becoming a real star in the lighter divisions, perhaps his era’s version of an Erik Morales or Marco Antonio Barrera. He might have been blinded by the possibilities and being within arm’s reach of obtaining that kind of status may have hindered his career. With Hunter, Mares can get back on track by making the right decisions inside and outside of the ring, thus making it the perfect time for him to enter the proposed tournament.

“There are negotiations right now about a possible tournament [which involves] a possible fight against big named fighter. I’m open for anything. Before, it was whatever I said, I told my coach I want to fight this or that, but now I have a coach and also a leader that I needed so bad in my life and in my team.

Mares expanded on his desire to be in the proposed featherweight tournament and even though it is mostly conjecture at this point, he knows that his presence in a tournament of this magnitude will only further authenticate the legitimacy of the tourney itself.

“We all know that Golden Boy is now officially working with Top Rank. That’s the tournament I want to join, those are the elite fighters, the world class fighters and I think I deserve to be in that tournament. Again, it’s all rumors. I have not yet sat down with Oscar or anyone to talk about it, they did mention something. I’m not making it official but I do want to sit down and go over that and if I can then I’m willing to go into that tournament.”

Mares is clearly not afraid of competition and I believe he is inspired to rise to the moment should he be presented with it. His focus is better than it’s ever been and he has the kind of mind frame associated with fearless, world-class fighters.

Mares insists he will be ready for a potential November/December date, despite the fact that he was in a car accident Wednesday morning. The accident wasn’t serious enough to threaten his status for the remainder of 2014 and he seems more concerned with getting back to training, which he’s been doing lightly for several weeks now.

“I was on my way to the airport, I had to fly out to Bristol for ESPN Friday Night Fights and I got into an accident. I got rear-ended, but thank God it wasn’t major. I was not wearing my seat belt unfortunately, and I got tossed around [in the car].

“I got bruised up and hit here and there. I went to my chiropractor, he checked me at it was just a bruise. I’m good though and hopefully we start again next week because I’ve been actively training and running.”