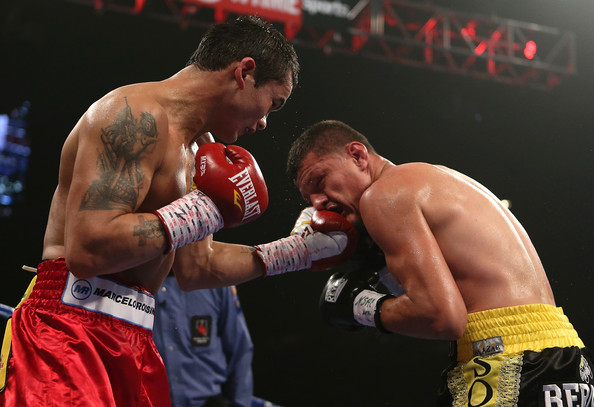 Argentinian puncher Marcos Maidana (32-3, 29 KOs) resurrected his career Saturday in a back and forth all action scrap against veteran Jesus Soto Karass (26-8-3, 17 KOs). Soto-Karass has lost four out of his last seven fights, and came into this fight a hungry fighter, returning to a weight class he had previously vacated due to his inability to make weight; I guess the reported $80,000 was enough of a motivator to shed those last few pounds. Soto-Karass won his last two fights and came into the Maidana fight with some confidence from the victories.

The fight left some questions yet to be answered by Maidana, it may have posed a few more than we originally went in with. Let’s be honest Soto-Karass was supposed to lose this fight; he was in there to make Maidana look good. Maidana was coming off a career long seven month layoff and the worst performance of his career where he was totally out-classed and bullied by Devon Alexander. The come forward Mexican was just what the doctor order to make Maidana look like the killer we once believed he was in the 140lb division.

Soto-Karass had other things on his mind, WINNING, and winning by knockout. Maidana came out hard, mounting a vicious body attack from the opening bell claiming the first few rounds fairly easy. Soto-Karass was game and motivated by the thought of a possible extra $100,000 prize that would be awarded to the KNOCKOUT KING of the night.

Maidana was unable to dispose of his opponent as easy as he assumed and began to show signs of that awful fight in his native country of Argentina where he broke numerous rules verses Chop Chop Corley and resorted to illegal tactics. At the end of the third round, Maidana unleashed a right hand after the bell, infuriating Soto-Karass; the blood of the Mexican would boil and force him to give his best efforts which caused troubles for Maidana. That lead to Maidana’s anger getting the better of him again in the fifth round and caused him to purposely fire and land on Soto-Karass after the bell once more, the corners had to intervene to prevent an unnecessary disqualification.

The fight had its share of both action and fireworks with a dash of bad sportsmanship; it was so intense that each man had points taken away from them by referee Kenny Bayless in the 4th round for continuously hitting during the break.

Eventually Maidana got the win we all knew he would receive, after hurting Soto-Karass in the seventh round and coming out in the eighth guns blazing, landing lefts and rights on the Mexican whose punches seemed to have nothing left on them. Maidana was relentless in his physical pursuit and that’s when Bayless jumped in and pulled Maidana off, resulting in an 8th round TKO.

Maidana was awarded the vacant WBA Inter-Continental welterweight title, this fight was a WBA title eliminator. One would assume this is a ploy to pit the Argentine puncher verses the Full WBA Champion Paul Malignaggi. How does a guy who gets pushed around in both his fights at welterweight earn a title shot?

Sure the answer to that is make him the mandatory to the lightest punching champion you have at welterweight, and capitalize off the fighter in Maidana that the networks are willing pay $250,000 coming off a lost, only in boxing right?