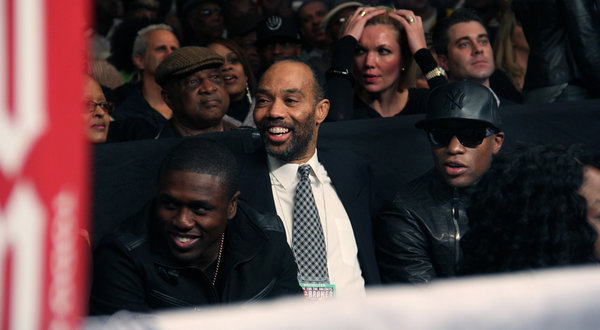 The name Al Haymon is becoming more synonymous with boxers who want to maximize their earning potential. No, Al Haymon is not a promoter. He acts mostly in a managerial or advisory role. However with the amount of people that are inking on the dotted line with Haymon, many industry insiders seem to think something big is set to happen.

Most of Haymon’s clients are aligned with Golden Boy or appear on Golden Boy shows that are mostly aired on Showtime and Fox Sports 1. However, with the recent rumblings on a possible split in Golden Boy between De La Hoya and Schaefer, many feel the onslaught of new signees is a sign that Haymon and Schaefer could be going on their own, while Oscar De La Hoya is looking to take back control of his company.

The face most aligned with Al Haymon is his right hand man, Sam Watson. Most people mistake Sam Watson for Al Haymon, well because he’s the guy that’s always on television with his sons behind the fighters as they step in the ring. ThaBoxingVoice.com caught up with Watson and he stated there is no takeover, it’s just business.

“Nothing bad about it (signing fighters) all. We want to give fighters the opportunities to fight. We’re not taking a lot of money from them. We just want to see big fights. We love to see them get the opportunity. He (Haymon) lives for them getting the best opportunities. We don’t drag our fighters overseas. We keep them m New York and Chicago, DC. We believe in the fighters ever since our first fighter Vernon Forrest,” explained Watson.

They have come a long way since Vernon Forrest. Now they have a conglomerate of over 60 fighters that dwarf some of boxing’s promoter’s stables on its own in talent. On the roster includes some names like Floyd Mayweather, Adrien Broner, Danny Garcia, and more recently international stars like Amir Khan and Adonis Stevenson.

The signing of Khan came to no surprise because ever since he was shunned by Mayweather for another Al Haymon client Marcos Maidana, it seemed like the only move if he ever wanted the Mayweather lottery. The Stevenson signing was a little surprising because Stevenson was built on HBO and was supposed to be penciled in to fight Sergey Kovalev in a big light heavyweight showdown. The drama ensued, HBO dropped the ball, and Stevenson left for 40% more than what HBO was offering him to fight Andrez Fonfara with no guarantee of a Kovalev fight happening. Now Stevenson will fight Fonfora across the street on Showtime and will almost certainly fight Bernard Hopkins later this year which was a fight he had always wanted even when he was knocking guys out on HBO.

So does Stevenson-Kovalev go to the waste side? All fingers point to that but Watson says the fight can still happen.

“They could fight on Showtime or wherever the fight is right. I’ve known Adonis for a long time. We had him before and now he’s back. He’s an exciting fighter. We will be making the biggest fight for sure. We’re not hiding Stevenson from nobody,” stated Watson.

While that sounds nice in theory, the realistic chances of that happen are slim as Kovalev is being built on HBO and his promoter Kathy Duva lashed out on Showtime and Golden Boy when Stevenson jumped ship to Showtime, basically killing the fight.

My co-host on our radio show Nestor Gibbs seems to think what Al Haymon is doing in the long run will be good for boxing. In the short term it doesn’t look good. Here are the odds for the Showtime card coming this weekend and the Mayweather-Maidana pay-per-view the week after via oddshark.com:

The odds for this past weekend cards via bovada.com

What my co-host says has some credence as it shows when Haymon has both fighters. there have been instances that the odds are close and we do get the big fights like the two fights mentioned above and with Garcia-Matthysse, and Broner-Maidana. Those instances however, only happen once or twice a quarter. The majority of the fights are heavy favorites for the Haymon fighters if not paired with another Haymon fighter and those fighters are getting premium network money. Let’s not forget the Andre Berto days when he would get paid seven figures to fight no hopers and would draw less than 1000 people to his fights. We all love Leo Santa Cruz but he’s been paid handsomely fighting smaller and older guys. Don’t even get me started and a rumored Danny Garcia-Tito Bracero bout.

Haymon fighters do get paid well but in the niche sport of boxing does is the pay warranted and does it lead to stardom? Aside from Floyd Mayweather, there aren’t a big percentage of Haymon fighters that can sell out an arena on their own. Most of the time those same fighters aren’t built regionally to gain somewhat of a following in their own hometown. Danny Garcia has yet to headline a card in Philadelphia although he has done well at the Barclays Center with and undercard full of Brooklyn fighters. Adrien Broner rarely fights in Cincinnati. Keith Thurman is headlining his first card and its cross country from his hometown of Clearwater, Florida. While they are paid well, you can argue most of their clients don’t bring much to the gate limiting their star power in a sport where there are very true few stars.

Another solution would be to sign up already established fighters like an Adonis Stevenson and a rumored mega star in Julio Cesar Chavez Jr. Watson declined to comment on Chavez Jr because even though he may be the face of the Haymon conglomerate, some things that Haymon does, he doesn’t even know about, especially the rumored 47 million dollars offered to Chavez Jr. “Really?” said Watson.” I don’t know about that part, I know that he’s that great guy. I don’t know about the 47 million and I’m not saying it’s true or not. A lot of things, Al does on his own. Yeah, Chavez is a great Mexican fighter but I never heard that.”

Chavez is said to be mulling an extension offer from Top Rank that he’s not satisfied with in his negotiations for a possible Pay-Per-View fight with Gennady Golovkin. If the rumors are true and Chavez does end up signing with Haymon, it all but cancels the fight with Golovkin. It would be the second time this year a de facto Haymon signing cancelled a big fight on HBO. This would also be his fight signing of a Top Rank client that’s still under contract. I don’t know how that will play out. HBO does limited business with Haymon and Top Rank vs. Golden Boy with Haymon are on the opposite sides of the said cold war.

But contrary to recent actions, Watson says Haymon is willing to work with everyone.

“Al Haymon is willing to do business with whomever. It’s not him, he’s a great guy, He’s a shrewd businessman and we love what we’re doing. We’re given fighters an opportunity of a lifetime. We made our money in the music business. We made so much in that business that we want the fighters to make the money. We don’t take much money. They’re doing the fighting not us. He believes in making things happen. If you had a son right now, you’d want him to sign with Al Haymon because we take care of our people. We don’t want to take a father away from a son, like the Garcia’s, The Porter’s, The Russell’s. They’re still getting their money.”

But what does boxing get out of it, plenty of mismatches with an even fight here and there? There are those people that say one man controlling the sport is good but by the numbers, the UFC model worked initially but ratings of UFC on Fox have decreased dramatically.
http://forums.sherdog.com/forums/f2/ufc-dying-mma-not-2720301/

I can admit I am a casual fan and I don’t know much more outside of Anderson Silva, George St. Pierre, Jon Jones, Ronda Rousey, and Cain Velazquez. Also, the purses in the UFC are significantly lower than that of boxing. Plus, the UFC has a pay-per-view every month much like what boxing is doing now. Plus, the boxing fan pays 25 a month already for HBO and Showtime. Is that what the future holds for what my partner says he is willing to take a risk on?

I hope not but history says otherwise.