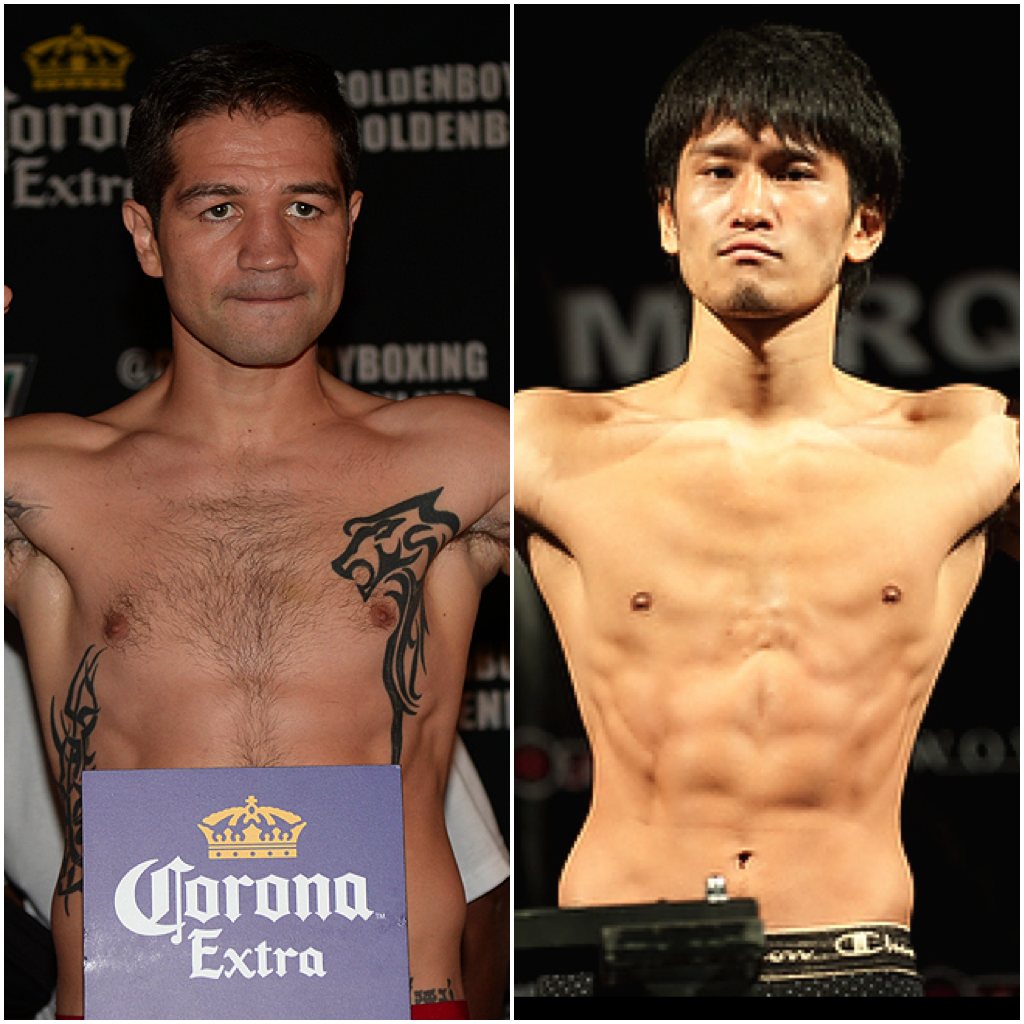 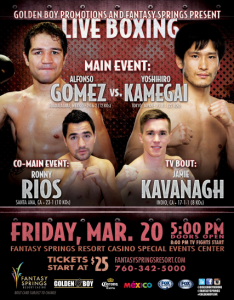 Tonight’s fight between Alfonso Gomez and Yoshihiro Kamegai, fighting at junior middleweight and scheduled for 10 rounds, was being built as a true slugfest. Gomez and Kamegai fought in front of an anxious crowd at the Fantasy Springs Casino in Indio, California in the main event of Golden Boy’s “Fight Night” On Fox Sports 1.

We hadn’t seen much from Gomez over the past several years with just 4 fights in 4 years, although he last fought in July 2014, and before that he fought Shawn Porter in 2012. Kamegai is best remembered for his June 2014 war with Robert Guerrero.

Both men were coming into the fight with a win in their previous fight.

The first round did not disappoint as both fighters landed significant leather. It wasn’t enough to do any serious damage, but that had more to do with the fact that both fighters have great chins and eat punches well. The story of the first round was the body punching. Usually, we see one fighter target the body while the opponent tries to take advantage of the hands being down by targeting the over the top counter punch. In this case, both fighters went to the body in an above average rate.

Kamegai, who was making his first true appearance at 154lbs after campaigning at welterweight, looked like the bigger fighter and often times took that role by walking through punches. He ate Gomez’s shots without hesitation, and then he’d deliver only one or two shots of his own, but he made them count, especially the ones to the body.

Gomez, however, looked faster than he had in his previous fights.

Kamegai tried to keep the fight in close quarters, but Gomez did an excellent job of quickly creating enough distance to get off his offense.

However, in the 4th round, the veteran tactics Gomez was using to create space finally caught up with him and cost him a point as referee Raul Caiz Sr. took a point from Gomez for an intentional head-butt.

Gomez was letting the leather fly and picking his moments to let his hands go in bunches. Kamegai stayed one-dimensional and never changed levels. Gomez created angles and kept a more effective pace.

The intensity level in the fight was raised in the 8th round as Kamegai turned up his activity level and put Gomez’s back against the ropes. Kamegai landed some shots that clearly hurt Gomez, although he did his best to stand his ground. Still, Gomez was noticeably fatigued, and he was less active and more on his back foot as the fight continued. That’s not to say that Gomez wasn’t in the fight still, but there was a noticeable decline in stamina from his performance in the first half of the fight and he was unable to maintain the pace he had set early on.

Kamegai and Gomez began trading back and forth in the 9th, and both men had their moments. It was difficult to score the round because both men had landed clear and decisive rounds, but Kamegai was the one that was gaining momentum.

The tide had clearly shifted heading into the 10th and final round, but the question was whether or not Kamegai, who was the dominant fighter in the final 3 rounds, could indeed win a decision after Gomez cleared so many of the early rounds.

There was no extra drama in the 10th, it was a good solid round by both fighters, but Kamegai again separated himself from Gomez.

In the co-feature of the evening, Ronnie Rios squared off with Sergio Frias in a 10rounder in the featherweight division. Rios was trying to bounce back after losing his last fight and getting stopped in the 5th round.

The fight started of competitive as Frias got off first and last. Rios got clipped in the early rounds, and it seemed to truly affect him. However, Rios managed to weather the storm and eventually got his offense on track, becoming the busier fighter and walking down his opponent.

The fight ultimately went the distance, and the judges scored it 99-91 twice and 98-92, all for Rios, who wins by unanimous decision.

In the televised opener, Jamie Kavanagh took on Miguel Zamudio in a scheduled 8 round affair in the lightweight division. It had been nearly a year since Kavanagh last fought, but he was in against Zamudio with the intentions to bring his streak to 3 wins in a row, but Zamudio was extremely game and gave the lightweight prospect Kavanagh more than he probably intended on.

Kavanagh had some noticeable ring rust to start the fight, he even went down in the second round off of a body shot from Zamudio. The knockdown wasn’t extremely telling because it wasn’t flush, and Kavanagh was clearly not hurt, but he went down nonetheless.

That was the wakeup call Kavanagh needed, not to mention the scolding he got from his trainer Joel Diaz in between rounds, and he was soon in control of the fight. Kavanagh began to showcase more and more skill as he picked his shots and used a steady stream of arm punches as a means of defense.

After Zamudio took a significant deal of punishment, enough that his eye began to swell in a gruesome manner, referee Raul Caiz Sr. decided call a halt to the bout in between the 5th and 6th rounds after the fight doctor evaluated Zamudio and declared he couldn’t’ continue.