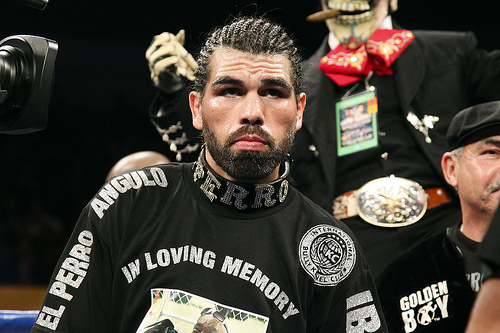 Alfredo Angulo is a tremendous blood and guts fighter who has a fan friendly style. He is a humble man; a man of few words. Never one to pop off at the mouth to an opposing fighter, he prefers his fists to do the talking. But after he was imprisoned for an excessive amount of time he does not appear to be the same fighter he once was. But let’s backtrack, a little to Angulo’s first loss of his career.

Going into his fight with Kermit Cintron, Angulo had very few rounds under his belt beating most of his opponents in less than five rounds and had seen the tenth round of a fight only once. Angulo was the favorite going into the fight and for good reason. Cintron was a tough fighter but he was knocked out twice by Antonio Margarito, who has a very similar style to Angulo. Angulo started off very slow in the fight and started pressing more and more in the later rounds and lost a unanimous decision. He later cited the loss due to an illness.

Angulo ended up taking over a year off and returned to stop journeyman Joseph Gomez in the first round of their bout not allowing him time to shake off the ring rust.

Up next for “El Perro” was the hard hitting brawler, James “Mandingo Warrior” Kirkland. This was a fight that fans wanted to see for a long time due to both having all action styles. Angulo ended up dropping Kirkland in the first round and proceeded to punch himself out in that same round seeking a stoppage. Kirkland was able to regain himself and Angulo ended up not being able to catch a second wind and suffered his only knockout loss. The unthinkable had happened and fans were quick to write off Angulo stating that he was done and would never fully recover.

Angulo made headlines not too long after the fight when he turned himself in to immigration for the time he remained and worked in the U.S. after his work visa expired. He ended up spending seven months in an immigration detention center where one would normally see three months tops. He was treated unjustly and by a video interview that was composed, we saw a different side to the man who was like a rabbit dog in the ring. The incarceration got to him and many including himself, wondered if he would be able to resume his career when he gets freed.

A few months after his release Angulo was back in the ring, this time with new trainer Virgil Hunter in his corner. Angulo was back on the right track with a victory but it was a quick victory that did not allow the ring rust to be shaken off.

A month later, Angulo faced off against Jorge Silva in a fight that caused many fans to believe that he had slipped quite considerably. Angulo was able to land power punch after punch but got tagged by a lot of shots from an opponent that should not have gotten as far as he did but he did come away with the victory.

All was quiet for a while and then talk came up about a possible fight with Angulo against a Puerto Rican fighter (possibly a rematch with Gabriel Rosado) on the undercard of the Mayweather – Guerrero PPV. The fight got scrapped when an agreement couldn’t be reached and the talk died down rapidly.

On March 29th, it was announced that Angulo would face Cuban Erislandy Lara as the co-main event to Marcos Maidana vs. Josesito Lopez on June 8th.

Lara had been perusing a fight with Angulo and other top fighters for quite a while being  unable to secure a top opponent.

For both fighters the timing is right. This fight will serve as a proving point to Angulo to show he isn’t finished yet and for Lara to prove his point that he belongs at the top. We should see a lot of action in this bout and as for Angulo…we will see if “El Perro” can get his bite back and reinsert himself into the title picture.