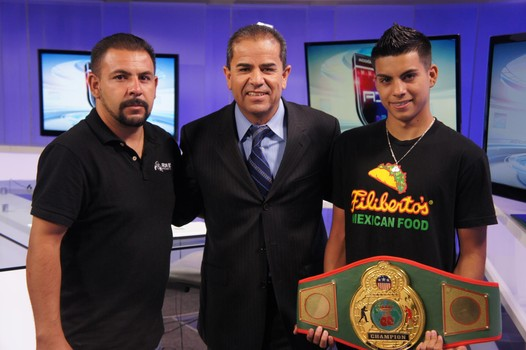 Junior Bantamweight prospect Francisco “Panchito” C. De Vaca (3-0 3KOs) enters the ring this Saturday on the undercard of Iron Boy Promotions ‘Iron Boy 10’ against Juan Carlos Benevides (3-1). De Vaca has been making waves around the local scene in Phoenix appearing on previous Iron Boy promoted cards. Rising through the ranks in professional boxing is tough for anyone but having over two-hundred amateur fights can alleviate the trials and tribulations that most fighters endure. Clearly, De Vaca is trying to stay busy and get rounds under his belt as this will be his fourth fight this year. Now with the fight on the horizon, De Vaca is preparing not only for this fight but to live up to the expectation that his team and the fans have placed on him.

Boxing since he was five years old, De Vaca has painstakingly given his blood, sweat and tears to one day walk the path he began down in May, he stated, “Boxing is what I love to do, this is a dream come true. We’re ready for Saturday.”

With so many amateur fights under his belt, De Vaca said he shed his amateur style and grown into a professional, he stated “I’m a different person in the ring. In the amateurs I used speed and movement. Professionally I’m 3 and 0 with 3 knockouts because I like to come forward and don’t like to run.” He continued, “I want the knockout to come and any punch can change the story.”

De Vaca describes himself as a come forward-counter puncher but he doesn’t think he has a style. “I combine my power with my pressure and my counter punching. I don’t think I really have a style.”

Juan Carlos Benevides boasts a similar record with three wins only losing once. Some fighters study film inside and out to try and figure their opponent out or at least see what they’re up against. De Vaca feels although that may work for others, that’s just not him. “Really I don’t like to study guys at all. I’m just preparing myself 100% and I don’t like seeing videos because maybe they will come out and fight different. I like to just go in the ring and fight.”

With his fourth fight of his career looming, De Vaca is confident that although Winter is approaching he will turn the heat up one more time this Saturday November 16th, at the Celebrity Theater in Phoenix, Arizona. Fans can follow Francisco C. De Vaca on facebook.com/panchito.cdevaca and on Instagram @panchitovacaofficial