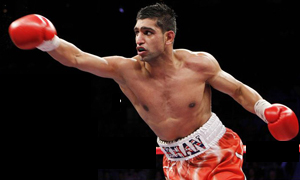 A very different Amir Khan took the stage at the London Mayfair Hotel press conference to announce his December 15th clash with Carlos Molina in the LA Sports Arena. His demeanor was noticeably more subdued than the usual, confident, self-assurance that Khan has demonstrated in the past. It seems both in and out of the ring the sentiment coming out from the Khan camp was that of ‘Change’.

“He had to and we had to make a lot of change”. Was the honest assessment from Asif Ali, Business manager of Khan Promotions? “People know when you have to do the change you’re going to be afraid, because you got to take that first step and go back to basics and learn from what you have done,” Ali went on to add. Khan went on to further discuss the changes made with his trainer, moving from Freddie Roach to Virgil Hunter and the impending relocation of his camp from LA to Oakland. The sentiment of change is further demonstrated with this fight being Khan’s first on the Showtime network, which will be airing the December 15th bout in theUnited States.

Stephen Espinoza, executive vice president and general manager at Showtime, has great faith in Khan’s ability, declaring him one of the top 5 most appealing fighters to casual fans of the sport. Clearly he sees a lot in Khan and is fully confident he will recover from recent setbacks.

“We know exactly what we have to do. We’ve never really had defense, if you think about it. I think it’s time to be smart and win fights with defense,” a reflective Khan commented.

The ability to make adjustments is one of the key attributes to greatness in boxing and despite what you may believe in Khan’s boxing abilities, it has always been clear, he strives for greatness and is always willing to take all the necessary steps to learn and improve. Hunter’s credentials as a trainer are unquestioned, but many will question if Khan has the ability to evolve his style at this stage of his career.

After back to back defeats, Khan knows this is a defining period in his career and another setback could signal the end of career in the top flight of boxing. Khan appears to be taking Carlos Molina very seriously. The Golden Boy fighter still doesn’t know what it feels like to lose and is in a no pressure situation, in a fight he will be heavily favored to lose. With his slick boxing skills and motivation to take his career to the next level, some may feel he is catching Khan at an opportune time.

There wasn’t much talk of future opponents, or moving up to the 147 division. It appears crystal clear, team Khan’s sole focus is firmly on the rebuilding task at hand. Although, as the conference drew to a conclusion a little bit of the old Khan surfaced as he boldly declared he will once again become a world champion in 2013. We will have to wait until December 15th to discover if Khan can get back on track, or Molina announce himself on the world stage.