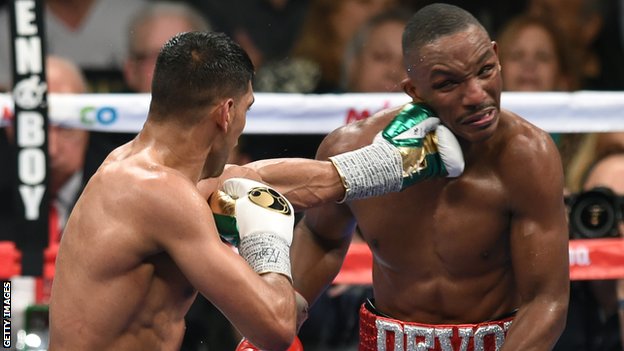 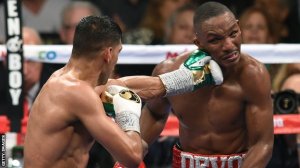 Amir Khan won a convincing 12-round unanimous decision victory over Devon Alexander in a matchup of two of the fastest welterweights in the world on Saturday in the main event of SHOWTIME CHAMPIONSHIP BOXING® from the MGM Grand Garden Arena in Las Vegas.

The impressive victory was nearly a shutout, with Khan winning 119-109, 118-110 and 120-108 to remain undefeated at 147 pounds and extend his winning streak against southpaws to seven.

In just his second fight at welterweight pounds, Khan was the supremely accurate boxer. The former unified super lightweight world champion landed 54 percent of his power punches to Alexander’s 32 percent and 43 percent of his total shots versus Alexander’s 20 percent. But it was Khan’s hand speed and combinations that were too much for Alexander, who couldn’t get inside against and take any chances against the Brit.

“We knew we had to make a statement at 147 pounds,” Khan said. “I was up against a very skilled fighter and I knew we couldn’t make any mistakes. I’m the best boxer with the quickest hands in the world and I think this was one of my best performances.

“I’m getting better as I’m getting older. I have the best jab in the business and my speed causes a lot of problems for guys.”

Khan, who has been campaigning for a chance to fight pound-for-pound champion Floyd Mayweather, stated his case for a mega-fight in 2015.

“I really believe I earned my shot against the best fighter in the world, which is Floyd Mayweather,” Khan said. “I believe he’ll have problems with my speed, movement and accuracy. I’m going to leave it to my team and let’s hope we get that fight.”

“He was the better man tonight,” Alexander said. “My coach told me to get off and I wasn’t getting off. I could have caught him I just didn’t do it tonight. I was supposed to follow the game plan, I was moving good but I just couldn’t move forward and get off.”

In the co-feature, Keith Thurman proved he can box as well as bang, showcasing his skills and footwork in a shutout unanimous decision victory over previously undefeated Leonard Bundo, scored 120-107 by all three judges.

Thurman (24-0, 21 KOs), who made the third defense of his interim WBA Welterweight World Title, scored a knockdown in the first round, but was unable to find his rhythm and went the distance for just the third time in his career. Regardless, he was the younger, faster fighter. Thurman kept his range and picked his punches, preventing the 40-year-old Bundu (31-1-2, 11 KOs) from consistently landing meaningful shots.

“Bundu was a smart fighter,” Thurman said. “He was tricky and he switched. He came to not get knocked out and he was able to do that, but he was unable to win rounds. It was hard to time him because he was always switching it up, but we boxed smart. It was a great learning experience.

Bundu, who was making his U.S. debut after campaigning mostly in Italy, found it hard to hit the elusive Thurman.

“He was moving too much,” Bundu said. “I don’t want to say he was running, but he was running. I got surprised in the first round when he dropped me, but I was fine after that.”

Former three-division world champion Abner Mares scored three knockdowns en route to technical knockout over Jose Ramirez in an entertaining scrap that was halted by Ramirez’s corner after the fifth round.

Mares and Ramirez traded blows and landed quality punches, but it was the former champion who consistently got the better of the exchanges and landed the more damaging shots. Mares (28-1-1, 15 KOs), who landed 57 percent of his power shots, scored knockdowns in the first, third and fifth round, with the final knockout coming as a result of a vicious three punch combo. Ramirez (24-4-2, 15 KOs) spit out his mouthpiece while on the canvas – resulting in another point deduction – and shook his head, but beat the count and finished the round. But his corner had seen enough and wisely stopped the bout following the fifth.

“Ramirez was a tough guy,” Mares said. “He took a lot of shots and he gave me a few, too. My corner was like, ‘Abner what are you doing? Use your distance.’ But I wanted to knock him out.”

“All I know is I’m going to be a four-time world champion. I’m going to conquer the featherweight division. Abner Mares is back. I want my rematch against Johnny Gonzalez. It’s going to happen.”

Ramirez was a game opponent but couldn’t handle the relentless pressure from Mares.

“I’m happy with my effort, but not with the result,” Ramirez said. “This is not where it ends for me. I’m going to continue. Mares is a great fighter. He is No. 3 in the world and I was honored to fight him.”

In the opening bout of the SHOWTIME CHAMPIONSHIP BOXING telecast, Jermall Charlo spoiled the U.S. debut of Lenny Bottai, defeating the Italian via technical knockout at :38 of the third round in an IBF Junior Middleweight Title Eliminator.

Charlo (20-0, 16 KOs) was pressing the action from the opening bell and landed a left hook to the head in the third that sent the previously twice-beaten Bottai to the canvas. Bottai’s corner threw in the towel at the same time as referee Jay Nady waved off the bout.

“K9, I want you. I want that IBF,” Charlo said, calling out current IBF Junior Middleweight World Champion Cornelius Bundrage. “I knew all week this was going to be easy work. I shot that short hook and he ate it. I have to take advantage of this one. It’s been a long time coming for Team Charlo. Everyone believed in me and now I’m here.”

Bottai, who fell to 22-2 with nine knockouts, complained that an earlier low blow from Charlo played a factor in the loss.

“I thought the low blow took a little steam out of me,” Bottai said. “I caught a luck punch but I’m OK.”

In the opening bout of the SHOWTIME EXTREME telecast, Errol Spence Jr. (15-0, 12 KOs) landed at will and scored a fifth-round TKO (2:45) of Javier Castro (27-8, 22 KOs) in a dominating performance against an outmatched opponent.