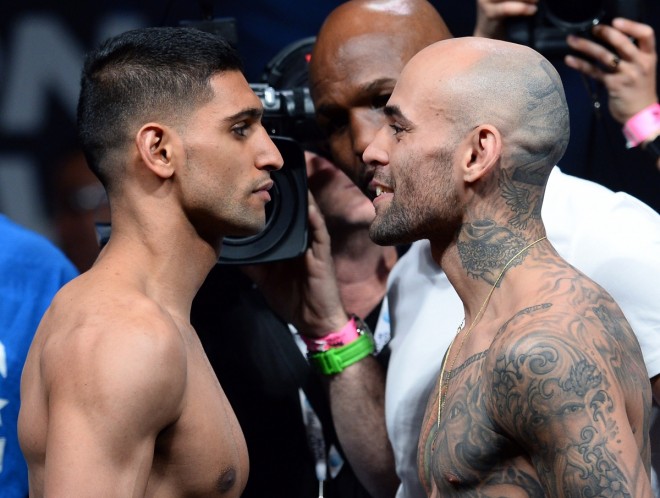 In the co-main event of the Mayweather vs. Maidana pay-per-view broadcast, Amir Khan took on Luis Collazo in a match that may very well determine Mayweather’s next opponent. It’s a welterweight match-up that lacked any real promotional build-up, and even Khan seemed more occupied with Mayweather’s future plans rather than the opponent in front of him. Khan’s noticeable lack of focus and questionable chin have led many to believe that this match-up could offer the sole upset of the night, but that proved to be foolish by the end of his bout on May 3rd.

From the onset of the bout, it was clear what kind of night Collazo was in for. Newly anointed by some as being some kind of power puncher at 147 lbs., Collazo was determined to test Khan’s questionable chin with single power punches. This gameplan proved to be incredibly ineffective thanks to Khan’s ludicrous hand speed and ability to string together combinations.

Each round that passed followed the same routine, and the only thing that changed in Collazo’s plan was to increase taunting. To his credit, Collazo was initially doing his best to keep the action going. He would come forward recklessly and throwing hellacious power punches, but Khan would immediately instigate a clinch and throw off the momentum of the bout up to that point.

It was Khan’s clinching that was frustrating not only fans in attendance, but Collazo himself which is what led him to so desperately look for the knockout. For twelve rounds the same pattern repeated itself, and by the end of it all Collazo’s efforts were all for naught. The judges awarded the unanimous decision victory to Amir Khan on scores (117-106), (119-104), (119-104).

Before the bout Khan made sure to remind everyone that he was opponents best option for an opponent. Following the results of the main event and ensuing press conference, it appears Khan was wrong. There’s no use in speculating when or if Khan and Mayweather will ever share a ring together, but the one answer we do know is that it isn’t going to be as soon as he hoped.