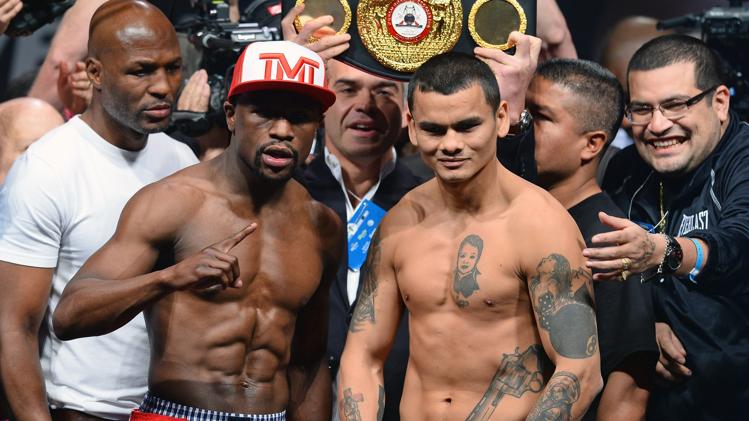 The May 3rd Showtime Boxing pay-per-view broadcast between Floyd Mayweater and Marcos Maidana was titled, “The Moment”. Upon its announcement, it was known more as “The Drubbing”. After all, it appeared to be a match-up between the pound-for-pound king of the sport versus a one-dimensional brawler. As true as that may have been, fans and viewers will forever remember this title in a new light: “The (Almost) Defeat of Floyd Mayweather”.

The two fighters engaged in twelve-round affair that begun much like it ended. Maidana’s gameplan was what is always expected when his name is involved: charge forward, throw as many punches at the opponents head as possible, and (unless unconscious) repeat the following round. As simple as it may have seemed, it proved to be incredibly effective against a master tactician like Mayweather.

Maidana’s biggest asset in his effort was his jab. It sounds odd considering his penchant for throwing power punches, but with the jab he was able to identify the range between himself and Mayweather, and would promptly close the gap. This would allow Maidana to smother Mayweather along the ropes, and bombard him with wild shots with hopes to eliminate the need for judges.

In typical fashion however, Floyd remained active and kept his composure. Rather than panic and play into the brawl his opponent so badly desired, Mayweather relied on his patented shoulder roll and counter-punching to pick Maidana apart. The two remained effective in their approaches, but the tides finally began to swing in Mayweather’s favor as soon as he capitalized on Maidana’s fading endurance.

Resorting to combinations with featured a stiff jab, hooks, and body shots Mayweather managed to not only slightly slow his opponent down, but successfully found a way to keep his hard charging opponent at bay. It was one of the few times where Mayweather really managed to shine as the disparity between the actual boxing technique of both fighters was significant. Even so, Maidana managed to power through in the following rounds and forced himself upon Mayweather along the ropes.

This constant back-and-forth lasted bell-to-bell with both fighters, and it called into question some of the criteria used for judging. Should sheer aggression, punch output, and ring generalship be enough to award a fighter a victory? Or should number of significant shots landed, movement, and technique be what truly distinguishes a winner? It was a debate that quickly took over social media as everyone watching seemed to have a different scorecard. (This fighter had it scored in favor of Maidana, 115-113) Ultimately, the opinions of others didn’t matter and the decision was announced as a Majority Decision victory for Mayweather on scores of (114-114), (117-111), and (116-112).

It was undoubtedly one of the most, if not the most, competitive fight(s) Mayweather has found himself in recently, and a match-up that fans want to see further play out. With all signs pointing to a rematch in September here is to hoping the boxing gods don’t manage to screw this one up.