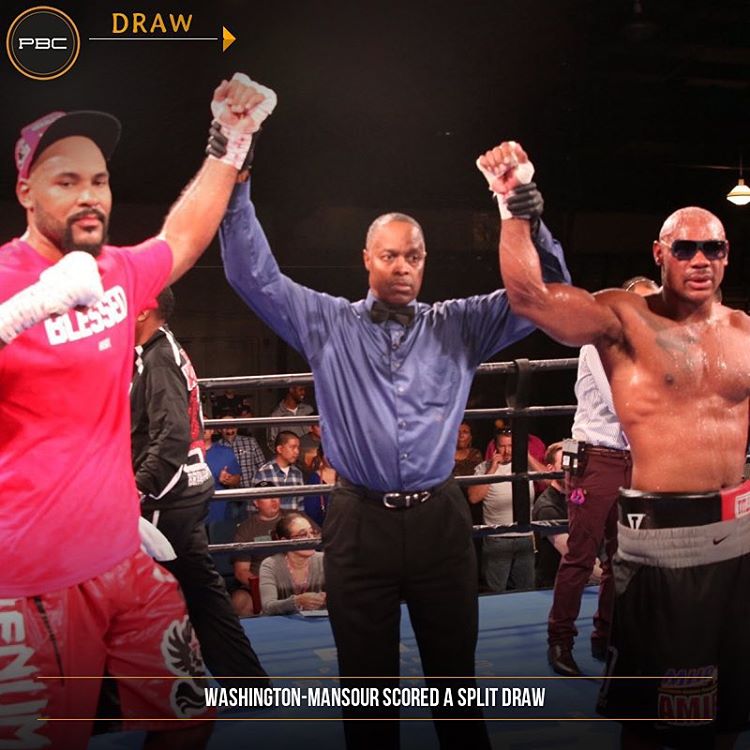 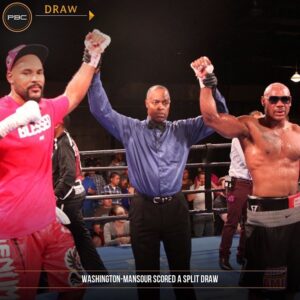 Premier Boxing Champions TOE-TO-TOE Tuesdays on FS1 and FOX Deportes headed to the Pacific Northwest Tuesday night from Little Creek Casino Resort with three exciting bouts that culminated with a thrilling heavyweight match up that ended in a split draw.

Gerald Washington (now 16-0-1, 11 KOs) controlled the early action with his length and superior boxing ability but the smaller southpaw Amir Mansour’s (now 22-1-1, 16 KOs) relentless pressure began to break down Washington as he closed the gap by landing overhand lefts. With the fight up for grabs the two heavyweights traded hard shots in the 10th and final round that led the judges to rule the fight a 10-round split draw scoring the bout 97-93 Washington, 96-94 Mansour and 95-95.

“I think it’s a terrible decision,” said Washington. “I definitely won the fight. No doubt about it. I won the first four rounds for sure. I rested up a little bit in the middle. The last three or four, he wasn’t even touching me. He was chasing me around. He wasn’t landing any shots at all.

“My corner was telling me to just jab and throw straight punches. I was landing all the good shots. He didn’t land any good shots. Why would I do a rematch if they’re going to do me like that? Look at his face, look at his ear. Look at my face, I didn’t take any punishment. I boxed him smart. He was being aggressive, but I was landing all the shots.”

“Washington landed some good shots in there, but I landed most of the shots. I kept the fight active,” said Monsour. “I gave the crowd something that they wanted to see. I gave the crowd excitement. That’s why they’re cheering me, and they’re booing him. I’m a boxing fan’s boxer.

“Washington was a bit awkward, I was just trying to gauge the height difference and after three rounds tops of gauging the distance between him and I, I felt like I started pressing him, forcing the action, landing the most shots, and tearing his body up. He couldn’t take the body punches, he was running out of gas. He didn’t give the crowd a fight. He didn’t give himself a fight, and that’s just a poor way of winning the fight or even getting a draw.”

The eight-round co-main event saw Cairo, Egypt’s Ahmed Elbiali (now 11-0, 11 KOs) control the fight from start to finish as he faced Mariano Hilario (now 13-4, 5 KOs) in a light heavyweight showdown. Despite two-way action throughout the entirely of the bout, Elbiali remained more active, pressing forward while Hilario attempted to land counter punches unsuccessfully. Elbiali remains undefeated after the judges scored the match a unanimous decision in his favor.