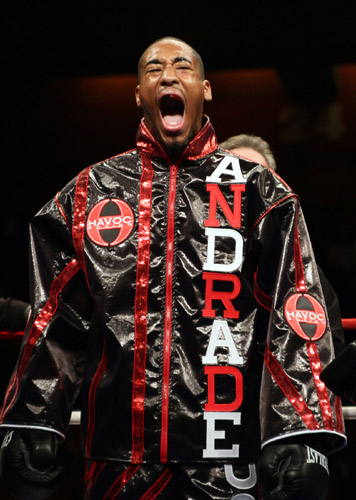 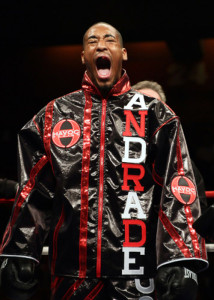 PROVIDENCE (August 13, 2015) – Undefeated junior-middleweight Demetrius “Boo Boo” Andrade (21-0, 14 KO’s) has filed an appeal regarding the recent decision of the World Boxing Organization (WBO) to strip him of his WBO World junior-middleweight championship. In the letter to WBO president Francisco Valcarcel, Andrade claimed the WBO failed to offer him a mandatory opponent during the past seven months for him to defend his title against.

Andrade’s appeal also mentions that the WBO sent a letter to him on January 23, 2015, which stated that the WBO would force a purse bid between WBO No. 1 challenger Jermell Charlo and Andrade if the fight agreement wasn’t resolved within (30) days. However, the WBO did not force the purse bid, allowing Charlo to sign an agreement to fight Vanes Martirosyan, nearly 30 days after Andrade had signed his contract to fight Charlo.

A copy of the aforementioned fight contract, which Andrade signed on January 14, 2015, to fight Charlo for $300,000, was also included as evidence to support Andrade’s claim. Andrade stated that the signed contract proved that it was, in fact, Charlo’s team, not Andrade, that pulled out of the bout.

Andrade requested the WBO to allow him to fight anyone by stating, “We respectfully request that the WBO allow Demetrius Andrade to defend the WBO jr.middleweight title against ANY one of the top 15 opponents. Only the WBO has the ability to force one of their approved challengers to fight him. We respectfully ask the WBO World Championship Committee to use their power to force a top 15 fighter to fight him at your earliest possible convenience. We would be more than willing to allow a fight to occur under the rules of a purse bid, if necessary. Please use your power and authority to step in and force a mandatory fight to allow Demetrius Andrade to defend his title in the boxing ring, where it should be decided and you have our word that we will honor the WBO by agreeing to fight anyone approved by the WBO before September 30, 2015.”

Team Andrade further expressed its willingness to defend his WBO title by agreeing to go overseas and fight a WBO approved opponent for less than $150,000 that, unfortunately, they were still unsuccessful at securing a bout.

Furthermore, Andrade argued that the WBO recently informed him of its intention to remove him from its top 15 rankings altogether, yet, the WBO continues to rate Saul “Canelo” Alvarez as the WBO World jr.middleweight No. 1 contender, although Alvarez hasn’t fought as a jr.middleweight since Sept. 14, 2013, nine months earlier than Andrade’s title defense. Team Andrade requested that the WBO World Championship Committee allow Andrade the same opportunity to defend his ranking.