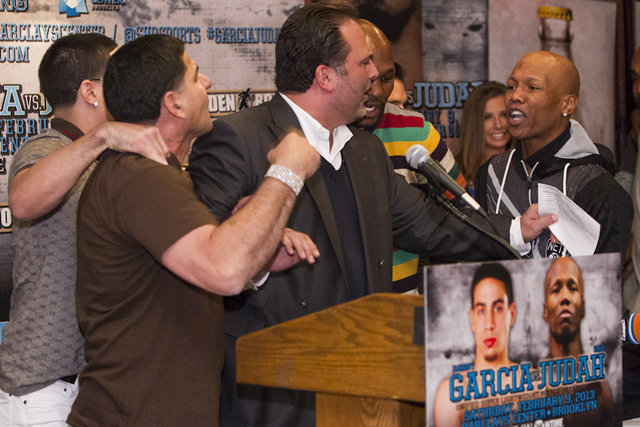 In an exclusive interview, Angel Garcia let us know how he felt about his son’s upcoming fight with ring veteran and former world champion, Zab “Super” Judah. Danny Garcia is coming off an impressive year in 2012, twice beating Mexican legend Eric Morales, and knocking out UK superstar Amir Khan. Angel believes that this fight is, “easy money” further explaining that, “Zab used to be a killer but this is a new era, its Danny’s time.”

While the elder Garcia made it clear that his statement was not intended to mean that this is an easy fight for his son, he did make sure we knew that on February 9th at Brooklyn’s Barclays Center, Zab Judah would not be getting a victory, and that the fight would most definitely not go the distance.

At the press conference to announce this fight, in what has become a pattern of sorts, there was a somewhat heated argument between Angel Garcia and Zab Judah. When asked whether that would provide extra motivation for the fight to not go the distance, Angel answered, “I just said the truth, not everyone likes the truth, and the truth hurts. He doesn’t intimidate me, He doesn’t intimidate Danny either.”

While on the topic of other fighters and their choice words for the father and son duo, the conversation veered towards the comments that Brandon Rios had been making on social media about Danny Garcia to which Angel commented,“I don’t care, I don’t care about him, I’m worried about Zab Judah. They are just words, words don’t hurt me. As long as he doesn’t put his hand on me, we are good.”

He continues, “We are worried about Zab, and after Zab we do whatever Al Haymon wants to do. Whoever is called the best after Zab, then we fight him.”

It is easy to see the pride in his son that Angel Garcia has, somewhat known for getting emotional when speaking about their accomplishments as a team, and also known for taking any fight that was presented to him. Angel told a story of Danny taking a fight against a fighter who was a last minute replacement with 28 wins, when Danny had only six wins. Angel told Danny in the locker room, “If you can’t beat guys like this, you can never be world champion”.