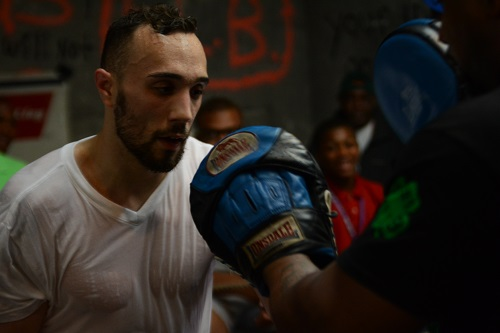 Philadelphia, PA: During Anthony Flores’ media workout at Fast Lane Boxing Gym in Philadelphia, PA Monday the Philadelphia native assured the press that he is ready to challenge Karl “Dynamite” Dargan on June 21 for his USBA Atlantic Coast Region Lightweight Title and told fans to “expect fireworks.” The 26 year old Flores said fans should not to be distracted by the Philly vs. Philly aspect of this fight come June 21, “This is bigger than Philly vs. Philly. I am fighting for a USBA title and he is defending the USBA title. That’s the way that I look at it and we are ready for it.”

Philadelphia Fats, Flores’ trainer, believes that Flores has what it takes to defeat Dargan on June 21, “Karl Dargan is in for a fight. Dynamite only beat Ramesis Gil by one point [ed. note: two points] but we unanimously beat him every round. Expect that I will be raising Anthony Flores’ hand; that is what you should expect. Anthony is just overall better than Dargan, period. We are going to show you and y’all are going to see it. Dynamite does not have a clue for what is in store for him. He don’t have a clue. We are going to break him. We are going to break Karl Dargan.”
Flores believes preparation for this fight is going to be his key to victory on June 21, “We prepared very well for Dargan. We brought a game plan to make Dargan’s defense look amateur. When you are fighting smart and using different moves and angles and you are not using the same shots that everyone else throws and you are being crafty, you are gonna hit a guy. You can’t miss every time. If I throw 600 punches and I land 100 punches, I still hit someone 100 times. That is the way I look at it. I will have to throw more punches. I can’t let him be comfortable. I can’t let him get into a rhythm. I have to be smart.”
Fats and Flores have been working at a much higher intensity for this fight. Flores said, “My trainer has been in the gym with me until 3:00 in the morning every night. We have been working our butts off. There are no excuses. We are just putting in the grit. It is one thing to see what someone is doing when everyone is watching but when nobody is watching this is three times what we do.” They have also decided to work with longer rounds to increase stamina, “I have been working with five minute rounds. It is not at all harder because we are bringing that same action in five minutes but we are just going to do it in three minutes.”
“I’ve spoken with Anthony and his trainer, Philadelphia Fats, and I have no doubt that he is 100% ready,” said Flores’ promoter Greg Cohen of Greg Cohen Promotions. “Anthony knows that with a win over Dargan on national television, he will propel himself squarely into the title mix at 135 pounds. I’m looking forward to a career defining performance on June 21.”
Tweet