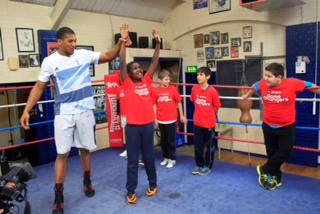 Anthony Joshua MBE had a blast with some young boxing stars of the future on Sky Sports Game Changers – and urged schools to start using boxing to help pupils learn about discipline and stay fit.
The Olympic Gold medal hero met a group of 12 year olds in the gym to put them through their paces on boxing skills and teach them the importance of fitness and nutrition.
The 24 year old, who stopped Dorian Darch in the second round of his fourth win inside the two rounds of his first four pro bouts, hopes the kids he met on Sky Sports’ Saturday morning show will be encouraged to get into the sport and believes boxing in schools could do a lot of good in areas of the development of Britain’s kids.
“Years ago there used to be boxing in schools which would help with discipline, self-defence and confidence,” said Joshua, who returns to the ring live on Sky Sports on March 1 in Glasgow against Hector Avila. “It’s a great feeling when you’re a winner. As a kid, whether you are playing Monopoly with your friends or fighting in the Youth Championships it’s great for them to compete and win.
“I’d love to see boxing brought back into schools in some form. It doesn’t have to be sparring or full contact boxing. Pad work, skipping, drills, bag work – they’re all good for encouraging better behaviour and better ways of living your life.
“Boxing has helped me with discipline. It has really shaped me and made me the man I am today. I left education at 18 and since then boxing has taught me to do my own research, both in books and online, and to generally keep sharp mentally.
“It teaches you right from wrong but also what hard work is really about. If you want something you have to work hard and put the hours in, not just expect it to happen. You get out what you put into life.
“The greatest thing about boxing is that you always hear stories about kids who came from nothing who make it and are successful at the top. It’s not about who you know, it’s about what you put in. Anyone can walk into a boxing club, you don’t have to be affiliated with anyone or know anyone, especially if you’re a young kid. There are so many different cultures and beliefs in a boxing gym; it makes it a really healthy place to be.
“I’d recommend for kids to follow what they want to do, but if they’re looking to get into something new then I would definitely recommend boxing. There are so many heights that you can take it to, but mainly it’s just a great education. There are so many great stories around the sport too, about all the great champions, it can be incredibly inspirational.”
Joshua was catapulted into the public eye when he gritted his teeth and won a thrilling Olympic Super Heavyweight final against Italian Roberto Cammarelle to bring the curtain down on a golden summer for Team GB’s boxing stars.
The Watford man has his sights set on World title glory in the future, but says he understands his responsibilities as an ambassador for British boxing and a role model for future stars.
“I see myself as an ambassador of the sport and just try to present myself properly because I do know people are watching me,” said Joshua.
“It’s important to do your best to inspire young people; we don’t want a lost generation. The kids of today are the leaders of tomorrow, they will inspire other people, maybe even my future children.
“That’s why it’s important to always remember that it’s more than just punching a bag, it’s about working hard, doing your homework, being in bed on time, getting up when you’re supposed to and, of course, getting enough exercise.
“I have had advice from Lennox Lewis as I’ve been on my journey in boxing, and his words have always stuck with me. I think that’s similar to the kids today. It’s interesting because a lot of kids can relate to my story and know where I’ve come from, I may even be able to relate to them more, I mean I’m only 24!”
‘Sky Sports Game Changers’ is a live Saturday morning kids’ TV show at 9am on Sky Sports 1. Presented by Olympic gold medallist Darren Campbell and Di Dougherty, Game Changers features a host of sports stars and Sky Ambassadors including David Beckham and Jessica Ennis-Hill as well as Joshua. These special guests plus a mixture of live studio skills sessions and features with downloadable skills sheets aim to inspire kids to participate and get them active.
Tweet