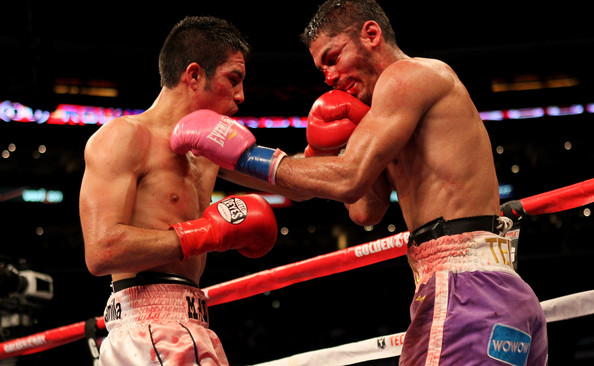 Antonio DeMarco defends his WBC Lightweight belt on the televised undercard of Andre Ward vs. Chad Dawson come September 8, 2012 at the Oracle Arena, Oakland, California live on HBO Championship Boxing at 10:15 p.m. EST. Antonio DeMarco is one of the brightest young stars in the lightweight division. He’s only 26 years old, and he’s coming off a career best performance in his version of the Quentin Tarantino movie Pulp fiction, with all the blood seen in the 11th-round TKO of talented Jorge Linares in October of 2011. “My first impression was that I was just able to accomplish something magical, something very important, I was able to accomplish my dream, that night my dream became reality,” DeMarco said in an interview with Thaboxingvoice.com.

DeMarco battered a bloodied Linares around the ring until referee Raul Caiz, Sr. halted the action at 2:23 for a dramatic comeback win by DeMarco, becoming a world champion for the second time in his pro career. Linares’ lows wouldn’t stop there as a relatively unknown Sergio Thompson (22-2, 20 KO’s) would become the man to hand Linares the second straight loss of his career in a 2nd round TKO. Linares came into the fight with the far superior skill set, and yet he was getting treated as a punching bag and was eventually dropped in the second round. The fight was stopped immediately because of a cut that Linares suffered over his left eye. DeMarco had this to say, “Realistically that’s just obstacles and test that this beautiful sport presents us with. The loss allows us to learn more than our victories. I think Jorge Linares has a tremendous amount of skill and talent and I hope that he has the will and a strong mentality, trust me if he sets his mind to it he can be world champion again.”

John Molina Jr. is widely considered one of the hottest young lightweight prospects in boxing. He has 19 vicious knockouts among his 24 wins. His lone loss came at the hands of Martin Honoiro, yes, the same Honoiro that was outclassed by Argenis Mendez. Molina also had a big scare in a come-from-behind win against Hank Lundy — who was putting on a boxing clinic until he got careless — John Molina Jr. needed a knockout to win and he did just that, stopping the then defending champion and previously unbeaten “Hammerin” Hank Lundy.  DeMarco weighed in on his September 8th opponent, “John Molina is a difficult and dangerous fighter, he’s strong and hungry to be triumphant, with plenty of will to be world champion, I say this because I myself have experienced this when I fought verses [Jorge] Linares. I wanted that title by any means necessary. Believe me that is exactly why we are preparing very hard in the gym, both physically and mentally.”

Both Honoiro and Lundy were able to have great success verse Molina. DeMarco’s frame and south paw stance will present numerous problems for Molina, who finds very little trouble in allowing his opponents jab to occupy his face. “I’m not going to say that I’m coming to knockout or win, because those are not my words, my words are that I will show up to give a great fight so that the fans live and tuned in can win. Like I’ve always said, inside the ring let he who wins to be who god decided.”

This fight is by far more risk than reward, as Molina Jr. does nothing to cast DeMarco further ahead as a super star. While limited in skill, Molina is no push over and like most bangers, he has a punchers chance to prove it with his 76% knockout ratio. DeMarco is no stranger to big punchers having faced arguably one of the best fighters and punchers in the world in the late Edwin Valero. DeMarco had this to say, “That fight was my reward, it was a hard, tough difficult fight, but I like to dream, I like to dream so much and we took a risk facing [Edwin] Valero when no one else wanted to fight him. Unfortunately, it didn’t go well for us but we were able to acquire plenty of confidence, plenty of experience, and believe me after that fight with Edwin Valero, what can I tell, no scenario or any rival can put fear in me (laughs) thanks to that fight.”

The experiences learned in the Valero fight can prove to be key elements in deciding the winner of what is expected to be a war in this fight. Molina Jr. has yet to face any one on the level of Linares or Valero. While Molina is no Brandon Rios in terms of name and popularity, the fight will take place on the big stage. Set up as the co-main event of one of the two biggest fights taking place in September of this year. Fighting as the co-main on HBO Championship Boxing can do wonders for the winner by catapulting their careers to the next level. “My fight with Edwin Valero was something that God placed in my path, I’ve always said God doesn’t make mistakes, he does things step by step and he may present you with obstacles and tests along the way. But if you pass those afore mentioned tests believe me, an even better reward awaits.”

Better rewards are most definitely on the horizon for DeMarco and a win in this fight can put him in a fight with rising star and self-proclaimed “Mr. HBO” Adrien Broner, who just recently decided to make the change from 130lb to 135lb division. In a recent interview here on ThaBoxingVoice.com, Broner made cocky statements in calling DeMarco out over our airwaves. DeMarco had this to say, “Right now in my mind, my focus is only John Molina Jr. for September 8th. September 8th John Molina Jr. deserves all my attention, it’s going to be one tremendous fight and God willing, everything comes out right. I don’t like to look past my opponent but I believe that is a job for my promoter, I’ll fight with whoever because I was born [to fight], I’m in boxing to become world champion. I want to be remembered in boxing history. With those illusions I’m here now, first it was my dream to be champion of the world, now I am, and now my dream is to unify and be remembered in the future.”

Is it possible to see DeMarco in with some of the world’s top tier fighters? Of course, with his height of 5’10, he might fill out at the 140lb division where great match ups can be made. He has the size, skill, and talent to compete with the likes of Garcia, Khan, Alvarado, Rios, and many more. This fight will be the starting point of when HBO decides to air all future Antonio DeMarco.

“We are at the 135 lb division, maybe tomorrow or in the future sooner then later, we will be at the 140lb division offering the boxing public great fights, because I’m a fighter and it runs in my blood. It’s what I like; it’s what fascinates me stepping into the ring and offering great, spectacular performances. It’s what most inspires me and it’s what keeps me alive, my daughter, and my wife. I have tons of motivation to come out on top and believe me I’m excited to offer great fights at the 135lb and 140lb division [maybe even] the 147lb division.”