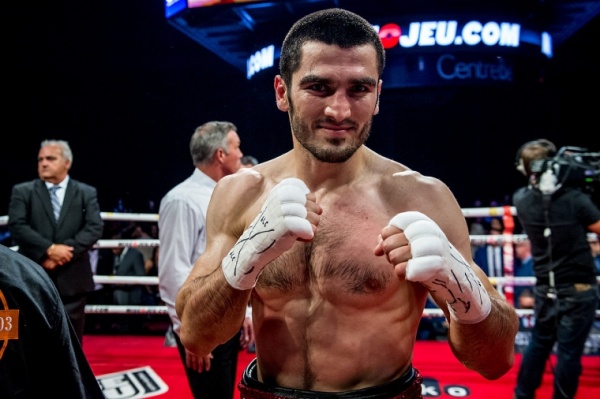 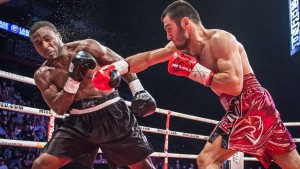 He stalks his prey like a lion, until he attacks, you may not even notice him in the ring. This Russian lion is a light heavyweight named Artur Beterbiev (7-0, 7 KO) and when he pounces, a roar from the crowd follows as he swats away at the unfortunate prey’s body and head.

Beterbiev has a decorated amateur background and since turning pro, has been leaping to the top of the division. After only seven fights, he is ranked number eleven by both the WBA and WBC as well as number ten by Ring Magazine. Beterbiev is expected to return April 4th, according to an article by boxingscene.com with an opponent to be determined.

Rising fast, he is aiming to fight his way to “official challenger” status for Sergey Kovalev’s light heavyweight crown. Kovalev (26-0-1, 23 KO) is the unified champion of the division, holding the IBF, WBA and WBO titles. Kovalev won the IBF and WBA belts from Bernard Hopkins last year and has fought Beterbiev twice as an amateur.

“I boxed him twice – in Kislovodsk with sparring and fighting for the championship of Russia. And I won twice,” said Beterbiev.

Now as professionals, both Beterbiev and Kovalev are making names for themselves as boxer-punchers with bone-shattering power. Beterbiev trains alongside former light heavyweight champ Jean Pascal (29-2-1, 17 KO), who is scheduled to face Kovalev in March.

Regarding a professional collision with Kovalev, Beterbiev insists that he wants to become a mandatory challenger first to prevent negotiation issues if negotiations ever take place.

“[Kovalev] has three belts – this is an obvious fact, and therefore he is really a strong fighter. I do not see this as a problem – to fight with him, or with any other world champion,” Beterbiev said, according to boxingscene.com. “But I would do it after becoming the official challenger for the world title – to ensure that there were no issues.”

Beterbiev’s last fight was against the then-undefeated Jeff Page Jr. (15-1, 10 KO), in December 2014. In the closing seconds of the first round, Beterbiev was dropped by a counter right hand. The lion scurried to his feet quickly and came out for the second round ready to pounce. He blasted Page with shots to the head and introduced him to the canvas, three times. The fight was stopped after the third knockdown.

Beterbiev did all but seriously hurt Cloud in the two rounds they shared a ring last September. Cloud used his experience to pick shots off in the pocket in an attempt to keep Beterbiev off him, but there was no stopping the 30-year-old Russian, who pounded away. It was Beterbiev’s sixth pro fight with as many knockouts.

Beterbiev is making his march to a title shot; he will have to keep winning in scintillating fashion if he wants to mimic the success of his countryman Kovalev. With his merciless offensive attack, Beterbiev expects to be knocking on the door of mandatory status soon and has already made his presence known in the division.