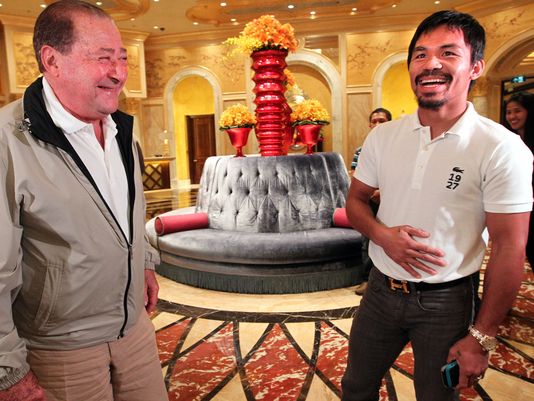 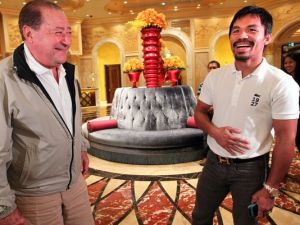 Cotai Arena, located in Macau China, is now becoming one of Manny Pacquiao’s preferable boxing venues. Leading up to the Pacquiao-Rios bout, which took place there, Bob Arum explained why this venue has recently became a boxing attraction.

“Because he [Pacquiao] has to give close to 40% to the government [when fighting in America]. It’s getting ridiculous. That’s what happens when you raise taxes, and you say well let the rich pay. Well boxers are in the category where they are rich. It was bad enough paying 35% but now they are paying 40%, enough is enough. These big foreign fighters don’t want to fight in the United States.”

Despite speculation of the HBO network not wanting to air another bout in Macau, China, Pacquiao-Algieri will take place in the Cotai Arena on November 22.

Recently Arum reiterated his plan of having more bouts in Macau, regardless of HBO’s preferences.

Arum stated, “Besides who are they [HBO to say they never want to air another bout in China], if it’s my money and Manny’s career.”

“We are probably fighting in the best location in the world, which is Macau in the Cotai Arena, which is a tremendous place to watch the fight. It’s too bad someone like yourself [Dan Rafael] is not coming over to see why it’s so desirable to fight a big fight in Macau.”

Arum also discussed how often he plans to have Pacquiao fight in China.

“I have a boxing program which features fighters like Zou Shiming. They said to me they wanted Manny to fight there once a year. If Manny is going to fight twice a year, he fights there in the fall, and in the spring he fights in the United States, or some other place.”