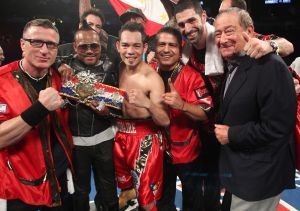 It looks like the return of ‘The Filipino Flash’ Nonito Donaire will come sometime in March in his native home of the Philippines. Bob Arum told ESPN.com’s Dan Rafael that Donaire was set on fighting in his native country.

“He wants to fight in the Philippines,” Arum told Rafael. “We’re going to see if we can book him in a fight in March.”

Nonito Donaire was the 2012 fighter of the year, but in 2013 suffered a defeat to Guillermo Rigondeaux and it all seemed to slide slowly from the top. He struggled with Vic Darcninyan before knocking him out last year. Then in China, he defeated Simpiwe Vetyeka in the oddest of circumstances.

He stepped up and took on Nicholas Walters and showed signs of the old Donaire but Walters proved to be too big and too good stopping him in 7.

Donaire has not fought in the Phillipines since 2009. Arum told Rafael that Donaire would be moving down from 126 to 122, as Donaire himself said that the knockdown was a blessing as it was likely Donaire would move up to 130.

Could the move down reignite Donaire’s career? It’s possible that there are winnable fights for Donaire but the best fighter at 122 is Guillermo Rigondeaux and he already put on a clinic against  Donaire when the two previously fought.