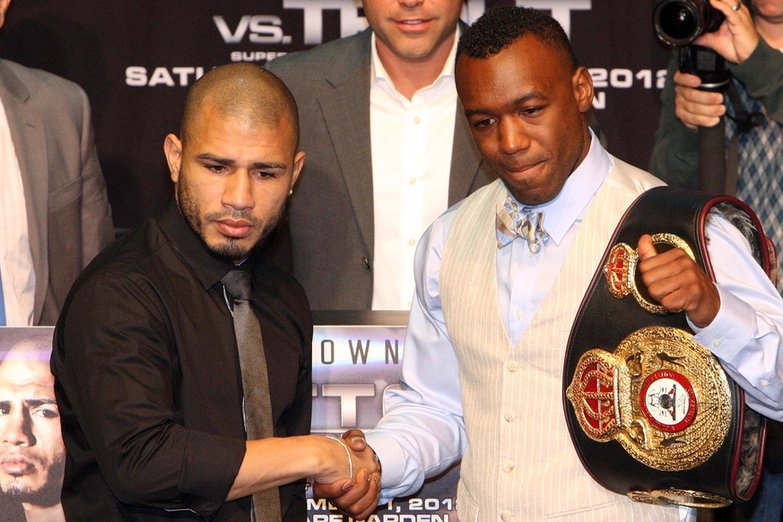 New York, New York the big city of dreams is the saying of the world’s most famous city. A place where no dream, whether big or small is out of reach and according to Frank Sinatra, if you can’t make it here, you can make it anywhere. For Austin Trout, that dream is to make it here and make his name known to the boxing public in the world’s most famous arena, Madison Square Garden against Puerto Rican superstar and New York’s most popular boxer, Miguel Cotto.

According to boxer and SHO commentator Paulie Malignaggi, “Fighting Miguel Cotto in the Garden is like fighting the devil in hell.” Malignaggi might be the best to know what it is to fight the Puerto Rican in his home away from home, as Malignaggi suffered a broken jaw and lost a decision to Cotto when they fight at the Garden in 2006.

However, Trout is no stranger to fighting on the road and has faced some difficult circumstances in the process. When he faced David Lopez in Mexico, according to Trout, “They played a lot of mind games. Mexico is very unprofessional but at the same time those were the type of hurdles we had to go through. The rings too small, oh well he can’t run. They ended up fixing some of it, they tried to mess our room up, and I had to burn calories anyway, so I went for a walk. They threatened my coach’s life. So I said after we whoop Lopez’ ass, let’s get the hell out of here.”

Out of hell and into the spotlight, Trout is getting accustomed to new surroundings as he stays and enjoys the penthouse life in his hotel in New York City. Trout is in town to do what he says he is destined to do and that’s to be the first person to beat Miguel Cotto in New York. Trout considers this bout the perfect fight in and out the ring. Inside the ring Trout explains, “Whatever style he wishes to come out with, whether he comes forward or boxes, it’s perfect. He drops that left hand and telegraphs his punches, I’ll be able to pick him apart, than sit down and land some shots. This will be the fight to show the best Austin Trout on the right stage.”

Outside the ring should he win, it might be the right stage for the world to get acquainted with Austin Trout. Trout is an American fighter who is personable, articulate, and almost the exact opposite of his opponent Saturday night. However, Trout hasn’t shared the same success and knows what’s on the line for him. “This fight is going to promote my dream or it could stop here, it’s all riding on this fight. I think I can be a superstar; I’m more of a people person. He’s had a top promoter I haven’t; I just got one, that’s what’s been the difference. I haven’t been to get on TV because those promoters own those dates. I need my brothers to come step up and support me.”

At the final press conference it certainly seemed like there was some support for Trout as they backed up the champ’s words at the presser and turned back the words of the challenger. While Miguel Cotto is known to call New York City home, Trout feels New York City should be his second home. “I’m more New York than Miguel Cotto is. My mother and grandma are from Brooklyn and my grandpa is from Harlem.  I’ve been coming back and forth since I was little. I’m not new to the city but in a sense I am new to the city. This is truly my second home, I mean they claim its Cotto’s second home but it’s truly my second home.”

Trout has a chance to claim New York and its fans Saturday night. But just like any worthwhile dream, it’s not going to be easy fighting the New York crowd and judges who may give some home cooking for the Puerto Rican star. Oh, and in case you forgot, he has to fight a world class fighter in Miguel Cotto. But Austin Trout is prime and ready for the challenge in dealing with all those factors.

“I have to stand and trade with him. If I tactically fight him, they’re going to give him the rounds. I know what I’m up against; I’m up against the crowd and the Garden. I’m going to have to engage. I got to use my jab and use that sucker all night. We have to neutralize his left hand, but I’m taller and longer than him. We’re not going to be running, we’re going to be fighting from a distance and giving him angles like Roberto Duran. Running is wasted energy. The plan is getting him early and taking the crowd out of it because he tends to not do well late, if things aren’t going his way.”

Trout doesn’t feel anything Cotto can do to affect his game plan. Whether Cotto tries to smother him and crowd him, or box him and get Trout to come forward, Trout is prepared. He’s also prepared to pepper Miguel Cotto in a face that scars and swells easy because of the wars Cotto has been in.So whether the doctors stops it or he beats down Cotto, Trout is leaving the onus on the judges and referee, even though he knows he needs to be dominate to beat Cotto in New York.

Regarding the officials, Trout explains,“He’s going to swell up and cut up, Will they stop it? That’s up to the doctor. I’m not going in looking for the knockout and wait for it to come it. If he falls he falls, if not we put it in God’s hands.” As far as Cotto taking those shots, Trout says, “We’re in the business of getting hit, I got a good chin and never been down, you can’t say the same about Cotto. He’s fought some good southpaws like Zab Judah. Judah was a great win but it was different weight class. Judah was hitting him with a lot of shots, but can he take those shots from a true 154lber?”

Should Trout make Cotto succumb to his shots, the future of Austin Trout could drastically change. With the powerful backing of Al Haymon, the paydays, fame, and much more may be in sight, maybe even a Canelo Alvarez shot. But Trout isn’t counting his chickens before the eggs hatch. “It’s a catch 22, because if I beat the hell out of Cotto, Canelo really ain’t going to fight me. I’m not worried about Canelo; I’m worried about Saturday, whether they give me Canelo, it doesn’t matter to me until after Saturday.”

In a city where every dream is as tall as the skyscrapers that line up the Manhattan skyline, Trout seems ready to stand to his tall order and achieve his goal. Last year, the underdog New York Giants, went from being out of the NFL playoffs to winning the Super Bowl. The motto of the team was all in. Just four years before that, they gave the same performance and the fans latched on to the motto “You can’t spell destiny, without the NY.”  Trout can go from being on TV Azteca to the grand stage in one night and he says, I’m starving, my ribs are touching, and I need this.”

It’s all in his hands now, he controls his own Desti-NY.