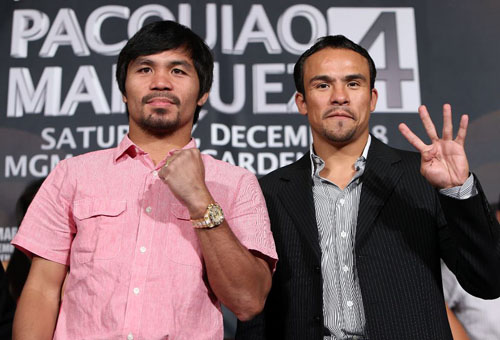 With the Manny Pacquiao – Juan Manuel Márquez 4 welterweight rumble projected to be a sellout at the MGM Grand Garden Arena, Top Rank announced today that the pay-per-view portion of the card would be available in Las Vegas via closed-circuit at the following MGM Resorts International properties: ARIA, Mandalay Bay , The Mirage, Monte Carlo , New York – New York and Circus Circus.

Closed circuit tickets to Pacquiao-Marquez 4 priced at $50, not including applicable service charges, go on sale This Monday!  December 3 at 10 a.m. PT.  All seats will be general admission and will be available at each individual property’s box office outlets.

All-new editions of HBO’s all-access reality series 24/7 PACQUIAO/MARQUEZ 4 debut on Saturday, December 1 (9:30-10:00 p.m. ET/PT) – while the finale debuts Friday, December 7 (8:00-8:30 p.m. ET/PT), the night before the high-stakes welterweight showdown. All four episodes will have multiple replay dates on HBO, and the series will also be available on HBO On Demand and HBO GO®.

Pacquiao (54-4-2, 38 KOs), of the Philippines, and Juan Manuel Márquez (54-6-1, 39 KOs), of México, who have won world titles in 12 weight divisions between them, will go mano a mano and toe-to-toe, for the fourth time, in a 12-round welterweight battle,Saturday, December 8, at the MGM Grand Garden Arena in Las Vegas, Nev.

The Pacquiao vs. Márquez 4 telecast, which begins at 9:00 p.m. ET / 6:00 p.m. PT, will be produced and distributed live by HBO Pay-Per-View® and will be available to more than 92 million pay-per-view homes. HBO Pay-Per-View, a division of Home Box Office, Inc., is the leading supplier of event programming to the pay-per-view industry. Follow HBO Boxing news at www.hbo.com and atwww.facebook.com/hboboxing. Use the hashtag #PacMarquez to join the conversation on Twitter. For Pacquiao vs. Márquez updates, log on to www.toprank.com or www.hbo.com.