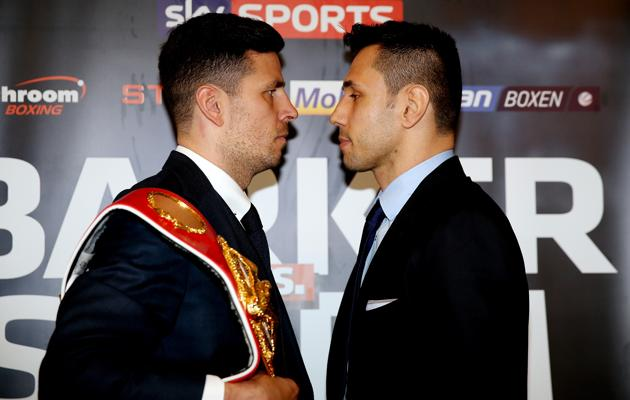 Dazzling’ Darren Barker makes the first defence of his IBF Middleweight world title against the experienced former champion Felix Sturm on the 7th.

Barker will face the veteran German away in Stuttgart in an intriguing bout. 31 year old Barker became the champion earlier on this year with a thrilling victory over Australian Daniel Geale.

The pressure and awkwardness of Geale combined with a vicious body shot floored Barker but he was somehow able to return to his feet and grab the win. The body shot was a really hurtful blow and Barker showed the heart of a true champion to get back up.

Barker had achieved his life goal which many said he had the talent to do but some doubted his mentality. Some wondered if he had what it takes mentally to achieve at the highest level and fulfil his undoubted potential. Barker proved the doubters wrong and showed that he has the determination to rise up when the going gets tough and show what he is made of.

It was a brave performance from a fighter who was prepared to give everything to win and who will now hopefully reap the benefits of his hard work. Personally I have never been happier to see a boxer win than I was for Barker that night. He is an extremely likable individual and with everything that he has been through he is an inspiration to all.

It is not often in this most masculine of sports that we see boxers, trainers and promoters alike all emotional following a fight, but that is what we had. This is testament to the sort of guy that Darren Barker is.

However, for all of this elation to continue Barker must overcome his mandatory challenger, the 34 year old Felix Sturm.

Sturm will be in his home country for the fight which could well be a huge factor in the fight following some controversial decisions going his way at home in recent years.

Back in 2011 Sturm was very lucky to have held onto his belts against Brit’s Mathew Macklin and Martin Murray. For my money both men did enough to get the decision against Sturm but both were to be denied in what in boxing terms is known as a ‘home decision’.

Sturm will head into the fight with an impressive record of 38 wins,3 losses, 2 draws and 1 no contest. He is a tough, veteran fighter who could pose a legitimate threat to Barker and his title.Sturm does seem to be a fading fighter though. His performances of late haven’t been as good as he was in his prime and appears to be a man on the decline.

Barker in contrast will come into this fight oozing with confidence after becoming world champion and will be determined to come through this fight successfully in order to set up some massive domestic dust-ups.The likes of Martin Murray, Mathew Macklin and Andy Lee are all possible opponents. Britain is blessed with some truly world class middleweights and if Barker comes through his fight with Sturm there is no reason why we cannot see these fights take place.

These would be massive fights in Britain and would generate huge hype and publicity. It would make fantastic viewing to see these four men fight each other.

Looking too much into the future is a dangerous thing for a fighter to do though and Barker must keep his mind on the task before him. Barker is a very professional man and will purely be thinking about the Sturm fight at the moment and will leave anything beyond that to Hearn.

This fight with Sturm will in all likelihood be a close fight early on but one which Barker should impose himself on as the fight carries on. Barker will look to utilise his boxing ability at times and at others look to land hurtful blows.

Barker has shown in recent times that his punches now carry good power as his body now seems able to take the rigors of being a professional boxer. This could not always be said of Barker, who has suffered more than his fair share of injuries in his time, but he looks to be physically strong now.

I expect a close, hard fight which goes the distance but I expect to see Barker having his hand raised at the end of the bout. Barker may well have to win clearly to get the decision over in Germany but I personally see that being the case.