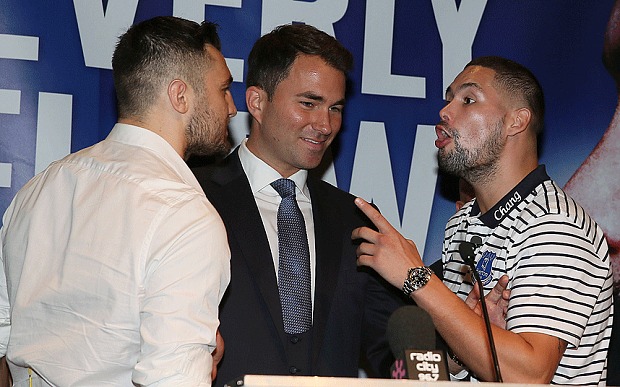 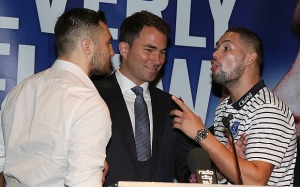 On Saturday afternoon, November 22, one of the biggest days in boxing will take place as an eagerly anticipated rematch between former Light Heavyweight champion Nathan Cleverly (28-1, 14 KO’s)
and former two-time championship challenger Tony Bellew (22-2-1, 14 KO’s) airs exclusively and live on
AWE.
The 12-round Cruiserweight World Title eliminator bout will originate from the Echo Arena in Liverpool, England and will be broadcast LIVE in the United States on AWE-A Wealth of Entertainment at 1 PM ET / 10 PM PT
On October 15, 2011, Tony Bellew got that match he was clamoring for and that was a world title opportunity with then WBO Light Heavyweight champion Nathan Cleverly.  It was a bout that was in the making for sometime as they were both undefeated & Cleverly had what Bellew wanted.  It turned personal and the grudge match saw Cleverly eek out a majority decision on a grueling affair.
This Saturday, both who have both since suffered setbacks, will meet again but this time they will compete as Cruiserweights with much on the line.
“It felt like my world had just ended,” said Bellew. “You’ve been in a hard fight, you’ve taken a lot of punches and thrown a lot of punches. It hits you hard. I thought I had done enough and I knew it was a really close fight. We were all waiting for him to announce it, it seemed to take an age and when the referee announced him as the winner, he went mad, jumping around the ring,”said Bellew.
“I don’t class it as a loss, I really don’t I look at my career and I believe I’ve been beaten by one man and that is Adonis Stevenson. I believe at worst in that fight with Cleverly you can give it a draw. If you are going to score that fight and say who the better boxer of these two is, it’s me. If you’re going to ask who landed the harder shots in the fight, it’s me. OK, you can say he wins rounds on little bit of extra work rate, especially the last two, but a 12 round fight isn’t about the last two rounds. Over the whole 12 rounds I was the better boxer, I won six rounds clearly and you can’t deny me that.” continued Bellew of the first encounter.
Because of the rivalry, it was a natural when both moved to Cruisweweight that hostilities would be renewed.
“I’m not really that bothered to tell the truth,” said Bellew. “It’s great boxing in front of your home fans, it’s a fantastic feeling, a buzz. I’ve had both sides of the spectrum. I’ve had 10,000 against me and 10,000 with me and let me tell you, it’s a lot better when you have them on your side. They can help spur you on through the dark moments, because when a fight gets hard, there is going to be dark moments, when you need to show what you are about and what you have got in the tank, they can drag it out of you.”
On July 12, Both Cleverly and Bellew shared a bill and scored knockout wins to set this rematch.  After Bellew’s win, he tried to fire the first verbal and psychological at Cleverly.
“I walked over and I gave him a piece of my mind,” said Bellew. “Does he really believe you were a World champion. I don’t think he does. The eyes don’t lie. I have looked into the eyes of a true World champion in Adonis Stevenson. He looks ruthless, looks deadly and looks vicious. Looking into Stevenson’s eyes and looking into Cleverly’s eyes, there’s only one World champion there, and I am not fighting him tonight.”
“He is mentally weak. Any man that is talking about retirement shouldn’t be fighting any more, simple as that. He’s fragile and he’s hiding a lot from people. I win the fight because I am too strong, too powerful and I am technically better than him in everything he does.”
Two co-main events feature two WBA world title bouts. Scott Quigg will make the 5th defense of the WBA Super Bantamweight title against Hidenori Otake of Tokyo, Japan. Also co-featured is two-time Bantamweight champion Jamie McDonnelldefending the WBA Bantamweight title against Javier Chacon of Argentina..
If that is not enough, then boxing fans are in for a terrific treat as two-time world title challenger George Groves takes on American Denis Douglin. The card also features undefeated British prospect Callum Smith as he sets to battle former world title challenger Nikola Sjekloca. Heavyweight and undefeated 2012 Olympic Gold Medal winner Anthony Joshua takes on 64-fight veteran Michael Sprott.
Tweet