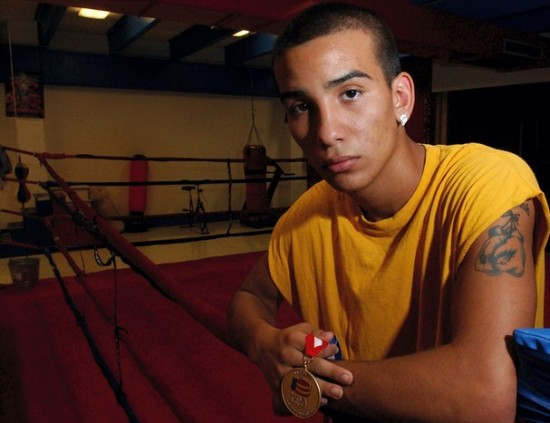 Jerry Belmontes is preparing for his first outing since the somewhat controversial split-decision loss he suffered to fellow South Texas native Omar Figueroa back in April of this year. The controversy mostly stemmed from the scorecard turned in by judge David Mendoza who had Figueroa winning the closely fought contest by a score of 118-110.

There were those who felt Belmontes did more than enough to win the contest outright, but at the very least it was a close fight that could’ve gone in either fighter’s favor, but certainly not by an 8 point margin. Belmontes boxed well and Figueroa seemed outmatched at times. However, Figueroa continued to throw punches and pushed forward.

There were quite a few swing rounds, difficult to score, but it ultimately came down to preference: you either preferred the boxer’s pugilistic abilities or the fighter’s activity. Belmontes clearly feels he deserved the win and has assessed his performance since then.

“I’ve seen that I should’ve not been too close, I smothered a lot of my punches and I should’ve thrown a little more, but everything else was on point and I did enough to win the fight,” Belmontes said.

There was a real feud between Belmontes and Figueroa, the lead up to the fight was focused around their six or so meetings in the amateurs, all of which Belmontes won. It’s clear that the bad blood wasn’t settled and it may take another go before these two fighters are willing to hash it out.

“I respect every fighter that steps in the ring, but Omar has no talent and I have said that forever. He fights the same way no matter what fight it is, no matter who it’s against he fights the same way. He likes to brawl but he can’t box, I showed everybody that night that he fights only one way and he said it himself that he wants someone to stand right in front of him and fight his fight by brawling it out. A great boxer can outbox him,” Belmontes said.

For the time being however, Belmontes will have to focus on the task at hand and that is his August 7th main event against the always tough Abner Cotto — the cousin of Puerto Rican superstar Miguel Cotto — scheduled for 10 rounds in the junior lightweight division.

Belmontes will have the luxury of home field advantage as he prepares to entertain his hometown crowd of Corpus Christi, Texas with an expected full house at the American Bank Center – the card will be broadcasted on Fox Sports 1.

It’s a big advantage to fight in your hometown, besides the familiarity and being the crowd favorite it is beneficial when your training only minutes away from the venue you’re fighting at. Belmontes is looking to make a statement in front of his hometown crowd and his motivation is deeper than ever.

“I’m training well, eating right and I’m just fully dedicated to boxing. I’m taking this much more personally, I didn’t always in the past but I am now and it’s more personal for me because of what happened in my last fight and I’m going to take it out on Abner Cotto. I’m going to pick [Cotto] apart and I think we’ll knock this guy out,” Belmontes said.

Belmontes has had a pretty good 2014 campaign. He defeated Australian prospect Will Tomlinson in what many felt was an upset, that win earned him a shot at Figueroa.

And even though he lost, Belmontes’ performance against Figueroa was solid enough to stay in contention. Former Golden Boy CEO Richard Schaefer said that the Figueroa fight was Belmontes’ “reward” for the Tomlinson victory, Belmontes feels the Cotto fight in his hometown has the same connotations attached.

“It’s always a blessing to fight in my hometown and in front of my friends and family. I think Golden Boy is giving me the fight in Corpus because of what I did to Omar, it’s like a ‘reward’ again,” Belmontes expressed.

As far as his thoughts on Cotto as an opponent, Belmontes is confident heading into the bout.

“I think they’re putting me in tough again, they named three opponents and I told them give me the best one and I’ll fight him. I think Abner Cotto is a tough guy, but I don’t think he has enough to last in the ring with me. He’s slow and stands straight up and my counter punching and my speed will play a big factor in this fight.”

Belmontes is clearly focused on Cotto, but in a thin division like 130 or even 135 means an outstanding single performance can propel a fighter into the title mix. Belmontes is aware that he needs to make something happen if he wants to be considered for a world title opportunity.

“I think [a win] in this fight could open the doors to maybe a rematch [with Figueroa] or if he doesn’t take it then maybe another champion at the 130 division. I don’t care though, I’ll fight at 130 or 135, and if I get a chance to fight for a world title then I’ll fight at that weight,” Belmontes said.

Belmontes is currently a free agent, although he’s been competing under the Golden Boy banner in his last several outings. He was signed to Golden Boy until his unanimous decision loss to Francisco Vargas, since then he’s been fighting for Golden Boy on a fight by fight basis.

The loss to Vargas has become more forgivable now that Vargas has established himself as a legitimate threat, but regardless of the reasoning Belmontes is definitely a different fighter in 2014 and being released of his Golden Boy contract may end up being a blessing in disguise because it will free him to fight any of the top fighters in either division and the title holders alike.

In response to his position as a free agent Belmontes said, “It motivates me. I have to show everyone I’m the best until I get a title shot because I can fight anyone. Not being in a contract means that when I win I can take the best opportunities out there.”