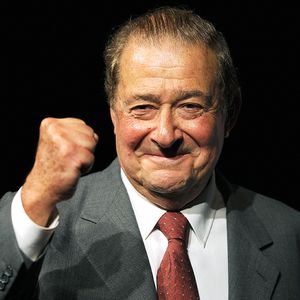 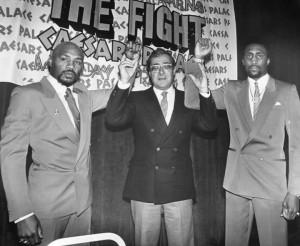 Dontae’s Boxing Nation (DBN) got a moment with Bob Arum and attempted to sandbag him by using his own words against him in his assessment of Floyd Mayweather Jr. but of course Arum didn’t miss a beat.

The interview started with the founder and CEO of Top Rank being asked about where the winner of the Mayweather-Pacquiao super fight will end up on his list of all-time greats and Bob dismissed the notion. He cited his age and the rose colored glasses of nostalgia.

“My feeling is that the winner of this fight and the loser, will go into the annals as great fighters but for me in my era, the greatest fighters were Ali, Sugar Ray Leonard and probably also Marvin Hagler.

The DBN interviewer then fired a shot across Arum’s bow by pointing out how he used to say Mayweather was better than Ali back when Mayweather was with Arum’s Top Rank. DBN does a good job of including an old video clip of Bob singing Floyd’s praises back in 2006 during the promotion of his fight with Zab Judah.

In 2006 Bob Arum said, “And I say this today to you, and I really believe it’s true that since Ali, there hasn’t been a better fighter, better boxer than this kid, Pretty Boy Floyd Mayweather. This young man, has the technique and the ability which puts him in my book, ahead of such greats as Sugar Ray Leonard, Roberto Duran and Marvin Hagler…”

Arum didn’t even bat an eye at the question though. He countered with the following explanation.

“Floyd Mayweather is an absolute genius as a defensive fighter and his moves are absolutely tremendous, but there was a difference. I was comparing him to the great Ali, which is a compliment, before the three and a half years. When Ali came back, he didn’t have legs, and he stood there with all these tremendous hard hitters and traded punches.”

He pulled that bit of mental gymnastics off without missing a beat. That’s insane. There were so many easier answers than that one! He could have just replied “That was nine years ago. Things change.” He could have said he was just doing his job and promoting his guy back then. That would be too easy though, wouldn’t it?

Bob Arum doesn’t need a simple retort. A simple retort allows for a simple counter. No, if you challenge Bob Arum to a game of verbal sparring, he throws you a twisted pretzel of logic and dares you to figure it out. That’s Bob Arum, and it’s an awesome thing to witness.

It’s worth noting that the video ends there, so I assume it left the interviewer speechless. No big deal. Being bested by Bob Arum is nothing to be ashamed of, anyway.