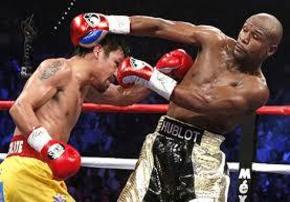 The ‘Fight of the Century’ went down on May 2nd, with Floyd Mayweather defeating Manny Pacquiao by unanimous decision.

The fight was the most lucrative in the sport’s history, generating more than $500 million in total revenue, including 4.4 million U.S. pay-per-view buys, and over $400 million in domestic PPV revenue.

By the numbers, it seems that a rematch would be even more lucrative. In boxing, a matchup of this magnitude tends to generate more profit in a rematch. However, Mayweather-Pacquiao is the exception, and there are reasons for that.

No one has ever looked in a Mayweather rematch.

Manny Pacquiao found a majority of his success in the first-half of the fight. Floyd Mayweather used the first-half to get accustomed to Pacquiao’s style. As soon as he figured it out, he was on cruise control.

Many people thought Mayweather lost to Jose Luis Castillo in their first go-around. In the rematch, Mayweather dominated, and it wasn’t close.

Mayweather fought Marcos Maidana twice in 2014, with the first fight being the closest the champion has ever come to losing. In a fight that I scored 114-114, Mayweather again found his groove in the second half to get the victory.

In the rematch, Mayweather dominated a majority of what was a lackluster fight, with the exception of a couple moments here and there.

What makes you think he’s going to fight any differently in a Pacquiao rematch? It would be a waste of time.

No one wants a rematch.

I honestly don’t know many people who would want to pay another significant PPV tab. If the rematch were to happen, I doubt the PPV would be as pricey, but it wouldn’t come anywhere close to the numbers they generated in the first dance.

Sit down and think, ‘Was this a fight to remember?’ To be completely honest with you, sometimes I forget the fight even happened because it wasn’t all that good. Now, do you remember Muhammad Ali vs. George Foreman or Marvin Hagler vs. Tommy Hearns? Every hardcore boxing fan – I’m positive – has re-watched that fight on multiple occasions.

If the action were anything reminiscent to the aforementioned bouts – trust me – a rematch would make sense, but that’s just not the reality.

There are so many better fights on the horizon.

Gennady Golovkin never disappoints, and his bout against David Lemieux slated for Oct. 17 from the Madison Square Garden will be nothing short of explosive. Miguel Cotto vs. Saul ‘Canelo’ Alvarez hasn’t been made official yet, but a date and a venue have already been decided.

Boxing has an amazingly bright future, and it’s an honor to be along for the ride.