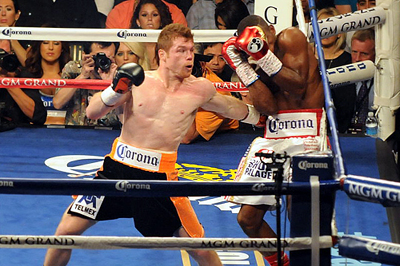 As I watched the Erislandy Lara versus Canelo Alvarez fight I knew that it was bound to be a chess match of sorts with Lara being the proven boxer with good defense and Canelo being the boxer-puncher, who in all honesty hasn’t completely settled on a style yet in his young career. As the first round unfolded Lara was using good movement to frustrate Canelo and keep him at bay. He threw in a few jabs and a straight left or 2 from time to time just to keep Canelo honest. Then in round 2 Lara’s tactics changed a bit. He went from being a good, elusive, defensive fighter to a literally running away type of fighter. He would make Canelo miss but instead of countering like Floyd Mayweather or Pernell Whitaker, he would literally run to the other side of the ring and get in a position to do it again. He wasn’t even on a Chris Algieri level last night. At least Algieri threw and landed a lot of punches while moving around the ring. For a guy who said he had the most heart Lara sure did not show that.

Meanwhile Canelo was coming forward and banging Lara to the body with powerful body shots whenever he could, and that would eventually slow down the Cuban just enough for Canelo to get off with big punches in the middle rounds. The body work and commitment to the body work, by Canelo was actually more related to the “sweet science” than the running that Lara was doing. Canelo made a strong investment to go to the body and he never stopped. He did not throw many punches to Lara’s head because Lara had good head movement when he came in range but he did cut Lara with a nice uppercut in the middle rounds. The fact that he came forward and tried to make the fight while Lara was running away most likely won him some rounds in the judges eyes.

What Lara did in this fight against Canelo is not what is sometimes called a “master boxer” performance. It was not a great display of defensive genius. It was plain and simple, one man running from another, versus engaging and using his superior skills to win the fight. There is no doubt that Lara was more skillful than Canelo. He landed some fast and accurate punches but a lot of his punches were blocked by Canelo. At times he stood right in front of Canelo and made him miss combinations to make him look silly. That is what is most disappointing about the Lara performance. He did not even need to run to win this fight. If he would have just used his good defensive skills to move and counter he would have easily won.

He not only lost to Canelo in the ring but he lost so much more with his performance. For one, Canelo most likely won’t give him a rematch. In the same manner that Ricky Burns never fought Junior Witter because of the trash talk, I can’t see Canelo giving Lara a rematch just on that factor alone. He will forever have the bragging rights of being the winner in the history books and that will be enough. Even more so his performance was so dreadful and appalling that no fan in their right mind is going to want to drop $60-$70 to watch him fight like that again. Hell, they might not want to watch him on premium cable if he fights like that.

This was by no means a robbery. Not even close. There are a lot of people out there claiming that it was a robbery and if you don’t agree with them you are a “casual fan” all the sudden. If that is the case then Robert Garcia, Max Kellerman, Ishe Smith and a multitude of boxing trainers and fighters have to be casual fans because they saw Lara as running as well. All that tells me is the accusers picked the wrong guy and are trying to justify the loss. Yes one judge had it 117-111 which was wide but I understand where that came from even though it could have been closer. He did not give points for a guy who runs around the ring and fails to engage because that is not boxing. That is not the “sweet science”.