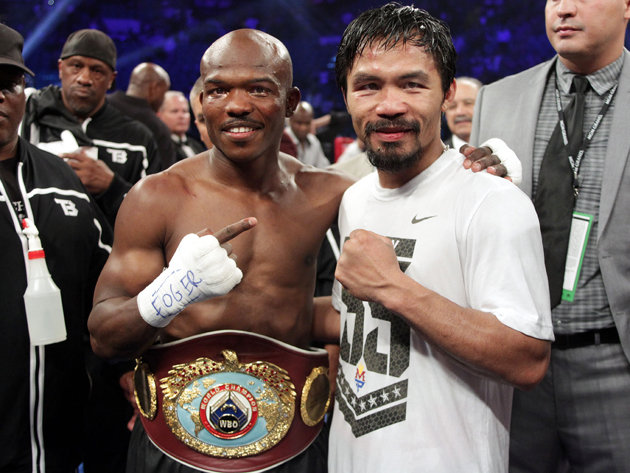 After two grueling wars put on by Top Rank Promotions on HBO between Bradley-Provodnikov and Rios-Alvarado 2, Bob Arum mentioned at the post fight presser of Rios Alvarado 2 and on the conference call leading up to the fight, that he’s looking to mix and match those 4 fighters along with Juan Manuel Marquez and Manny Pacquiao in a pseudo type of tournament.

ThaBoxingVoice.com spoke with Tim Bradley in a video interview regarding his next move after his war with Provodnikov. Bradley has always been a guy to fight anybody minus Amir Khan which is now seen as a move by Bradley to leave Gary Shaw for Top Rank. According to Bradley it’s all the same.

“I’ll get in the ring with anybody; my promoter has to do the best job to get me the best fights. I really can’t be picking and choosing. I captured 4 world championships and that’s cool but I’m at the point where it’s about the best fights out there and that’s what I want, bring them on that’s what I care about,” Bradley expressed to ThaBoxingVoice.com

In a recent interview with his trainer Joel Diaz on ThaBoxingVoice Radio show, Diaz explained that Bradley would be willing to go down to fight either Brandon Rios or Mike Alvarado. Bradley’s thoughts on the move down were kind of the same except he feels he needs to train properly.

Bradley was an interesting ringside observer at Rios-Alvarado 2 along with Juan Manuel Marquez, a name has been mentioned as a possible opponent for Bradley. In fact, Marquez seems to want that fight. Bradley himself has no problem with that fight either.

“I think a lot of people think he can beat me and I’d love to have that fight. He’s a legend , a living legend. Even though he’s an older fighter, he showed he still has it, he showed it against Pacquiao, I think a fight with him would be a great fight, a fan friendly fight, and I think everybody would like the style matchup.”

If not Marquez, Bradley till this day still wants to quiet the crowd that felt he lost to Manny Pacquiao.

“I always want that rematch because of that controversy. I want to silence the doubters and all those other people that think I lost the fight. I just want to prove to them and to prove to everybody, the boxing sport period-that I beat him and I can do it convincingly. So it’s definitely a fight I want, so there won’t be any controversy. I’d definitely entertain it. If it happens it happens, if it doesn’t it doesn’t. It ain’t my fault if it doesn’t happen. I wanted to fight him afterwards but he didn’t want to fight me, he wanted to fight Marquez. If a fifth fight with Marquez happens again, I’m still here, if Pac retires, than hey I’m still here.”