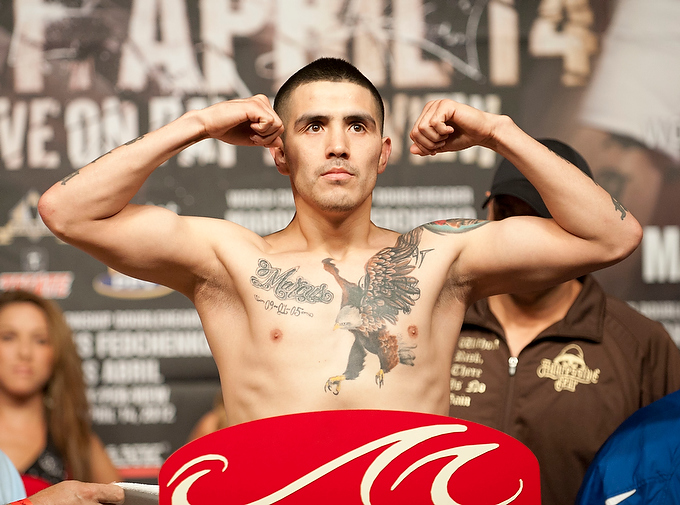 The last two times we have seen Brandon Rios in the ring, he was struggling to make the lightweight limit of 135 lbs. It was clear by the way he looked; Rios was a big man trying to force the lightweight division on his body. Some would say it affected in his performance against John Murray and to certain respects against Richard Abril.  But as he prepares for toughest fight of his life in Mike Alvarado, all that is behind him and doesn’t mind the criticism.

That what he has on his hands on October 13th, when he shares the same ring as Mike Alvarado, a fight. Many will wonder how well Rios can deliver and take a punch in his new weight class at 140. Rios feels the move in weight will only make him better. “”I was a natural 140 pounder that could make 135. I hit very hard. So when I get in that ring at 140, his power don’t have no advantage over my power. I can take his punch, like I’m pretty sure he can take my punch, hopefully. If not, fuck it, it’s an easy night for me. I think I can still smile at a heavyweight and say, ‘That’s all you got?’ Now I’m going to be fighting at 140, I’m going to feel great; my power’s going to be with me. I’m going to hit like a heavyweight and everybody’s going to see it,” explained Rios.

When Rios was on our air before, he had mentioned that he was forced to make 135 because if he didn’t the big pay days of fighting a Marquez or someone of note at 140 wouldn’t be there when he made the jump. His mindset has changed and is thinking about his health first. He said, “I have to watch out for my health, so my last fight was horrible. I didn’t like the way I performed in it. Now at 140, if I can’t make it, I’m going to 147. That’s it. If they say you’ve got to stay and fight this next guy — they said that at 135. If I need to move up and compete against bigger and better guys, I’ll go to 147 and fight some big names there.”

Should he win this fight against Alvarado, the options are certainly there at 140 and winning a title. He says why wait? “It’s a WBO eliminator, so why not go after it after the fight? You deserve it. The winner deserves to fight the champion. The only way the winner don’t fight the champion is if the champion don’t want to fight or moves up. After, I would love to go right away into it. Why wait? Why dick around and everything? Just jump right into it.”

Although he does feel that a victory or a loss could lead to a rematch with Alvarado should it live up to the billing it’s receiving. That’s fine by Rios because he says, “ I love to fight, this is why I’m in the sport, this is why I’m in the business. I love what I do. If he fights the way he’s been fighting, and I fight the way I’ve been fighting, the fans are going to love it. There might even be a rematch. You never know.”

For Full Audio of This Interview Click Here:  http://www.blogtalkradio.com/thaboxingvoiceradioshow/2012/10/04/brandon-rios-and-brian-viloria-live