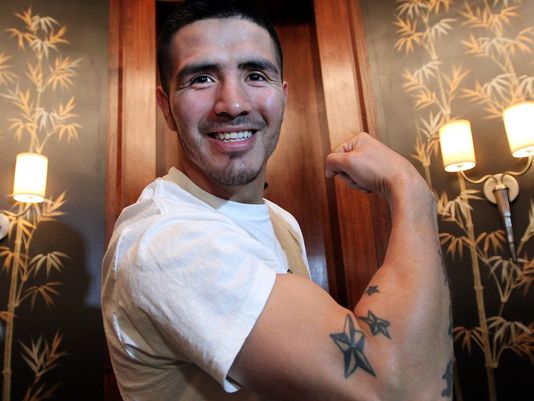 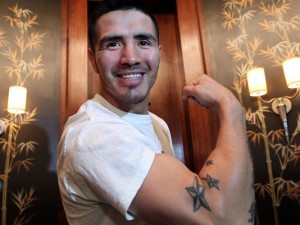 Brandon Rios sat in the Robert Garcia Boxing Academy in Oxnard, CA in a brand new tracksuit as his camp for his final fight with Mike Alvarado has already begun despite the holiday season. Polarizing figure, Elie Seckbach, was onsite as he released a video for online consumption via his YouTube channel, ESNews.

“Who would I like to fight in 2015? Whoever! Right now we’re just focused on [Mike] Alvarado,” Rios said. Rios who knocked out Alvarado in October of 2012 in what some debated was a premature stoppage found himself befuddled in 2013. Rios went on a two fight losing skid as he lost to Alvarado by a razor thin decision when Alvarado decided to move as opposed to bang with Rios, which seemed to startle Rios. Following the loss, Rios was selected by Top Rank to face Manny Pacquiao in his comeback fight after being knocked out by Juan Manuel Marquez. In a fight Rios fought valiantly in, but lacked certain tools that could have helped him excel in the fight, but gave Rios his biggest payday to date.

Rios was busted for a banned weight cutting supplement following the Pacquiao fight in which many looked at his strength and conditioning coach at the time, Alex Ariza, as potentially part of the blame. Rios last fought in the early fall against Diego Chaves in a fight labeled as a fight of the year and ended up being a fight that in a year or two people will forget happened. In what was a fight plagued with fouls, Rios and Chaves didn’t do much to make people more optimistic about their fighting futures as Chaves eventually found a way to get himself disqualified after numerous infractions. It truly was the definition of a fight that just happened and left no lasting memory upon one’s mind besides those with invested interest in either camp’s side.

As Seckbach riffled through a list of questions written by viewers of his YouTube channel and interacting with him on social media, one tidbit came out of interest. Rios explained that he is still getting used to the welterweight weight class and did not outright rule out a fight with Canelo Alvarez, though expressed severe doubt about it ever happening.

For Rios, January 24th in Las Vegas, NV will be a moment that will more than likely define his legacy as he is a fringe hall of fame fighter right now, but needs the win to maintain his style in his historical hindsight. Rios left little doubts with his reflection on what will happen in the fight on January 24th as he concluded the interview.

“It is going to be an epic battle between me and Alvarado and I want everyone to tune into that fight. It’s rare that you see a true trilogy like me and Mike Alvarado outside of Micky Ward and Arturo Gatti. It’s gonna be a hell of a fight, everyone is going to love it and [I’m} gonna do great work out there.”