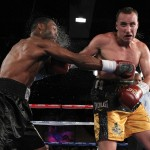 As the summer nears its end the temperature is cooling down but boxing is still hot in NYC, this was evident as Lou DiBella and 50 Cent’s SMS Promotions were able to pack the famous B.B. Kings in Time Square for another installment of Broadway Boxing. With nine bouts and eighteen exciting fighters eager to continue their careers, the fans were treated to a few gems as they witnessed knockouts, knockdowns, and all around a great display of fistic prowess.

The main event of the night was a rematch between Brooklyn natives Boyd “The Rain Maker” Melson (11-1-1 4KO’s) and Jason Thompson (5-6-3 4KO’s) in a junior middleweight bout over eight rounds. Employing a southpaw stance, Melson kept his defense tight to start things off as Thompson used his jab to pry open and open up with right hands, but Melson would more often find a right hook-straight left combination that piled on points. The fight would swing back in forth into each boxer’s favor as they traded in close and landed hooks that woke up the crowd, in the fifth round they fought in a phone booth and it was only due to immense heart and determination that both fighters were able to withstand the punches.

Bleeding over his right eye, Melson went back to picking his shots and working behind a jab on the outside, he was able to land a quick right-left hook that stunned Thompson as his output lowered. In the final round with Melson ahead and Thompson going for broke, a huge right hand landed on Melson’s face but he quickly came back with a left hook that dropped his foe, they continued brawling after the eight count as the crowd screamed at the top of their longs and cheered on both warriors. When the dust settled a winner was chosen as scores of 78-73 78-73 and 77-74 were read for Boyd Melson who avenges his only draw with a win, Thompson looking better than what his record states, will go back to giving other fighters more than they can handle.

In a bizarre heavyweight matchup, Tor Hamer (20-2 13KO’s) of Harlem, NY; won by 1st round TKO at 3:00 over the nearly 300lb Trinidadian Kertson Manswell (23-7 17KO’s). While the fight started off with both men at a distance, which would quickly change as the quick of foot and hand Hamer, landed a short right that stunned the towering Manswell who looked to clinch.

While two fighters clinching usually wouldn’t be an issue, when you have 500lbs in the ring things can get ugly as Manswell tackled Hamer to the ground and after getting up kept clinching and trying to drag Hamer with him. Playing the matador to the bull Manswell, Hamer leapt in with a right uppercut and put his opponent down for an eight count, he survived and again wanted to hold on, during a quick barrage he seemed to have slipped and was hit while down and turned over to what most in the crowd would say “play dead”. Having enough of the games between both fighters the referee called off the fight right at the end of the round and awarded the win to the popular Hamer in the co-feature.

Topping the undercard portion of the night, SMS Promotion’s Donte “The Real Deal” Strayhorn (2-1) of Cincinnati, OH took on the always tough and willing Justin Robbins (1-2) from St. Louis, MO in a four round super lightweight contest. Battling through a cut from a head clash, Strayhorn dominated the whole fight with quicker hands and powerful left hooks that blasted Robbins’ midsection. Occasionally stunning his opponent, Strayhorn was in with a guy who had no quit as Robbins kept pushing forward through the pain but the class difference was apparent as by the end of the fight “The Real Deal” landed at will. The judges scored the fight unanimously with a full sweep in favor of Strayhorn who bumps his record up to 3-1.

In a minor upset, up and coming fighter Neuky “El Platano Explosivo” Santelises (5-0 4KO’s) from the Washington Heights section of New York City lost by TKO in the first round against the usually unlucky Michael “Iron Bull” Doyle (1-3) of Prichard, AL. The two junior lightweight fighters entered their four round match confident with the hometown fighter Santelises bringing a large group of supporters with him to cheer him on. Looking to make it a repeat of his previous fight at BB Kings, “El Platano Explosivo” was winging hard shots at his shorter opponent but the visiting fighter found a kink in his armor and unloaded with a short left hook as Santelisis pulled back and put him on his back. Rising on unsteady legs, Santelisis was in no condition to continue and the referee had no other choice but to call it off at 1:19 of the very first round, awarding Doyle his second win, first by stoppage.

One of the most anticipated fights of the night was a female heavyweight fight between Sonya “The Scholar” Lamonakis (7-1-2 1KO) the hometown fighter, versus the tough Tanzee Daniel (4-2-1 1KO) of nearby Jamaica Queens, NY. The ladies fought over six 2-minute rounds, and did they fight! Daniel had tried to start the fight at her range with a jab but Lamonakis easily closed the distance and landed hooks and uppercuts inside, sometimes snapping her opponent’s head but always overwhelming her. The fight would play out the same round after round as Lamonakis fought head to chest with Daniel who lacked the energy to try more than roll in a few uppercuts of her own at time. After six fun rounds, Lamonakis was announced the winner to the delighted crowd with scores of 60-54 59-55 59-55 in her favor.

Former nationally recognized amateur standout Patrick “All” Day (4-0 2KO’s) of Freeport, NY made another appearance on Broadway Boxing while taking on once beaten Donald Ward (5-1 3KO’s) of Memphis, TN. The junior middleweights started their six round match quickly with Day using a sharp jab and follow up right hands to keep Ward at bay who was trying his best to get inside and do damage. The arsenal displayed by Day was fantastic as he was able to catch Ward in between his guard with uppercuts and looping right hands that buckled Ward at times yet Ward was still game until the final round. After dominating the bout with his quick offense and smart defense, Day kept applying pressure on Ward who was retreating and looking to land a lucky shot off the ropes. The jubilant Patrick Day was awarded a full sweep unanimous decision over Ward who took the long road home and back to the gym to try and get back on track.

Lightweights Amos “Too Smooth” Cowart (7-0 5KO’s) from Groveland, FL and Chazz McDowell (6-3 1KO) from nearby Yonkers, NY; waged war over six hard fought rounds. At first it looked as if Cowart was not only “Too Smooth” but too powerful for McDowell as he landed jabs and hard straight lefts out of his southpaw stance. Splitting McDowell’s guard with uppercuts and hooks to the body, it looked as if Cowart was on his way to scoring a stoppage win until McDowell adjusted and used a great mixture of offense and defense to stay out of range and land his own cracking straight right hands and combinations. The men would find themselves face to face both in the middle of the ring and against the ropes swapping leather to the crowd’s enjoyment; it was a miracle either fighter could make it to the final bell without touching the canvas after the hard shots they took. In the end a majority draw was scored with the score of 58-56 for Cowart and the other two judges split with 57-57 scores, this turned in to another opportunity as DiBella climbed the ring apron and announced a rematch at a future date at the Resorts Casino in Queens, NY in September.

In the opening bout, pro debuting Jeremy Abram of Cleveland, OH got his first win as he dominated junior lightweight Micah Branch (1-7-1) of Cincinnati, OH. Scores were 40-36 across the board as Abram used his reach and speed to light up Branch who had no answers.