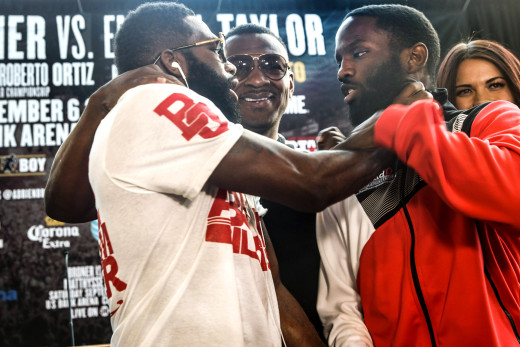 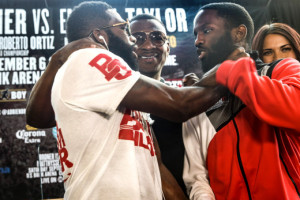 The former three-time world champion Adrien “The Problem” Broner (28-1 KO’s 22) is set to fight the up and coming 23-year-old Emmanuel Taylor (18-2 KO’s 12). The fight will take place in Broner’s hometown of Cincinnati, Ohio. Broner has not fought in front of his home crowd in two years and promises to put on a great performance. He is looking to put his career back on track towards boxing’s pinnacle after suffering his first defeat from Marcos Maidana.

Taylor understands he is the underdog, but knows he has a legitimate chance to pull off the upset. He has called  Broner a one-dimensional fighter and plans to make a big statement in the junior welterweight division this Saturday night.

Adrien Broner stands at 5’6½ and Emmanuel Taylor at 5’7½.  Despite the similarity in height, Broner maintains a four-inch reach advantage over Taylor. This can be a factor given the fact Taylor is not a fighter who often forces his opponent to fight on the inside. Both fighters have a tendency to display a low offensive output in the early stages of the bout. The first few rounds can be decided on who lands the extra one or two punches. Broner’s hand speed and reach should allow him to develop an early lead in the scorecards.

Adrien Broner has not been able to hurt his opponents in the welterweight division as he has in the lower weight classes. He does not possess knockout power, but nonetheless remains a very sharp puncher. Broner will have the speed advantage over Taylor, but Taylor possesses a slight edge in power.

Broner has shown to have a decent chin. Even though Maidana knocked him down twice, he managed to recover and hold his ground throughout the entire bout. Taylor has displayed the same ability as Broner, to be able to recuperate after hitting the canvas against Karim Mayfield and Victor Manuel Cayo; the only difference is Taylor is more susceptible to being hurt. Taylor has a much greater chance of being floored, but it will not be a shock if Taylor can stun Broner at any point during the fight.

Both Broner and Taylor tend to fight in spurts, and are typically conservative fighters in the early stages of the fight. After a few rounds Taylor slightly increases his volume of punching in a consistent manner. Broner also increases his activity level as the fight progresses, but to a much higher degree than Taylor.

Taylor will look to land hard body shots, and overhand rights over Broner’s philly shell defense. He will also strive to get into exchanges with Broner at certain times in the fight.

Broner will utilize his jab in the early rounds, which he normally does when he faces a conservative opponent. As the fight progresses Broner should be able to have big moments in the fight by breaking through Taylor’s defensive high guard with straight rights, uppercuts, and hooks around the tight defense.

Adrien Broner’s defense is not as bad as the vast majority of people believe it is. His conservative offense is what causes him major problems against volume punchers. He had problems against Ponce De Leon, Paulie Malignaggi, and Marcos Maidana when he allowed them to throw combinations without returning fire. When Broner doesn’t counter, it allows his opponent to swarm him with a multitude of shots without hesitation, which makes it nearly impossible to defend against. Broner will not have to worry about getting overwhelmed in this fight given Taylor’s conservative offensive output.

Emmanuel Taylor faces a similar issue as Broner. At times he maintains a high guard and allows his opponent to throw big combinations without answering back. This can be his downfall when Broner decides to increase his offensive activity in the later rounds.

Adrien Broner should be the favorite to win. Both fighters face similar issues in their lack of offensive output in the early stages of the fight, but Broner is the slightly faster and sharper puncher. He will utilize his jab in the early rounds, which he often does against a conservative opponent, and develop an early lead in the scorecards. Even if Taylor decides to pressure Broner in the early stages of the fight, he tends to ease off if he gets hit with a flush shot; this was evident in his fight against  Cayo.

As the fight progresses so will Broner’s and Taylor’s offensive output. The difference is Broner’s activity will be higher than Taylor’s, which will allow him to continue to win rounds especially if Taylor shells up without forcing Broner into too many exchanges. Taylor is a good fighter with a lot of potential, but Broner should come out with a UD victory at the end of the night.