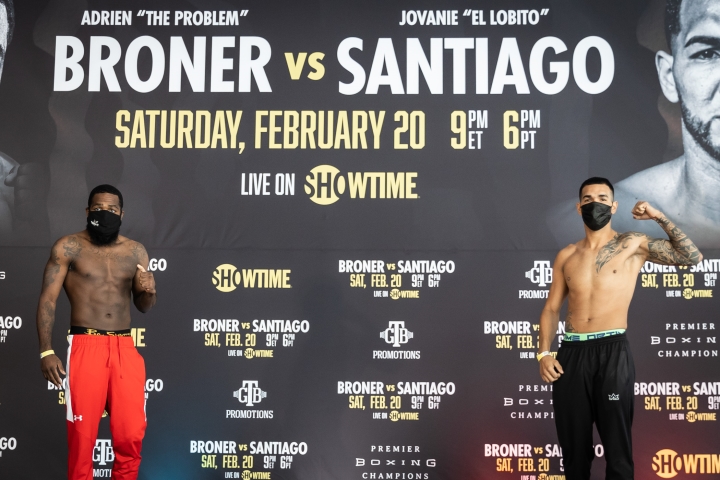 Adrien Broner’s return to the ring was not spectacular but it was a win.  His timing was off for a good chunk of the fight and he seemed winded which isn’t a big deal considering how much weight he’s lost in a short amount of time.

In the co-main event, Otto Wallin battered Dominic Breazeale but was unable to get the stoppage. Wallin was able to counter a majority of Breazeale’s shots.

Fight breakdowns can be read down below.

The opening round was slow but Broner looks like a fucking tank in there. It’s been a typical Broner fight but his timing is off.

The pace picked up quite a bit in the sixth round. Santiago came to fight and Broner seems to be making it click before the round came to a close.

Broner seems to be winded in the eighth and is losing the fight at this point. The jab and left hook really began to find their mark but it may be too little too late at this point.

The fight seems close going into the eleventh round but Broner’s confidence seems to be growing while Santiago stays busy. Broner lands potshots and a sweeping left at the end of the round.

Santiago’s corner tells him he needs the knockout going into the twelfth and Santiago goes on the attack. The two tangled for a bit, but Santiago’s work rate seems to be winning the round for him.  The two fighters trade until the final bell rings and it goes to the scorecards.

The opening round was a bit of a chess match but Wallin showed superior speed. Wallin was able to land some nice combinations on Breazeale and win the round. Breazeale stepped up the pressure some in the second round but was often countered.

Rounds three and four were pretty much the same but Breazeale seemed gassed by the fifth round.

Breazeale’s right eye was almost completely shut by the end of the seventh round. Doctors examined Breazeale before either round officially began. Said eye became even more so of a target for Wallin who teed off against the bigger fighter.  By the end of the round, it seemed like it’s only a matter of time before the fight gets stopped.

The elevnth round had some back and forth and Breazeale was able to hang in there . The biggest hit of the round came from both men going down on a slip and Breazeale landing on top of Wallin.

Breazeale lasted to the end of the fight without going down and that eye looks horrible. Both fighters landed some nice shots I’m the last round and it goes to the scorecards

Easter started the first round with the jab and landed a nice straight right to the body. Martin was pretty inactive but landed a nice body shot within the final 20 seconds of the round. The action picked up in the third round  and the jab has been money for Easter. The two fighters go toe to toe in the inside to finish off the round with both landing hooks to the body during the exchanges.

Rounds 4 and 5 pretty much repeated the previous rounds. Martin tried to pressure Easter against the ropes and found success on occasion but Easter jab kept snapping Martin’s head back.

After the seventh round Martin’s trainer tried to light a fire under him by telling him he’s doing nothing in the fight and giving it away and it seemed to work. Martin had the best round up to that point in the eighth. Easter suffered a cut from a clash of heads  which may have made him a little more defensive in the ninth round.

The eleventh round was a repeat of the earlier rounds. The first minute of the twelfth round had plenty of action but then the action slowed down a bit.