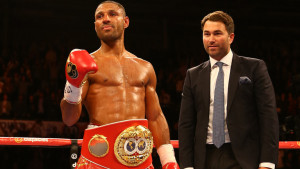 Before you make any assumptions that one is ducking the other, and you may already have those assumptions when reading this, don’t have them.

First and foremost, both Kell Brook, the IBF welterweight champion, and Brandon Rios, want to fight each other on September 12th. We know that for a fact.

The issue is not if they want to fight each other, the issue is a rematch clause. Top Rank and Matchroom Sport have been unable to make any ground on that particular portion. Brook wants the rematch clause and naturally, you would have to assume that Rios and his team are not big fans of the idea.

It’s unfortunate for Rios, who has waited for the past six months to land this fight, and it may not happen after all.

“We’re in discussion with Top Rank. It’s done yet. If that is done, then that will be the headline bout at the O2 [Arena] on September 12. If not, Kell might fight in October instead, but he’s training now with that date in mind.”

Robert Garcia, Rios’s trainer, isn’t pleased with Bob Arum, who believes the promoter should have had Rios fighting in May rather than wait this long, only to be potentially snubbed for another opponent.

“I just talked to Cameron [Dunkin] earlier today, and he said that there’s nothing, they [Matchroom Sport] have nothing for him,” Garcia said.

“We were hoping the Kell Brook fight happened, but right now, it looks like that’s not even gonna happen.”

From my perspective, a rematch clause isn’t necessary, for it’s real purpose at least.

From what it looks like, Brook and his team have a legitimate concern that Rios is going to put up a challenge. He’s strong, he’s tough, and he’s resilient. If Rios gets on the inside and starts banging that body, it could be a different fight.

We haven’t seen too many guys find success against Brook on the inside. Former welterweight titlist Shawn Porter, who is known for his “dog” type of fighting style, wasn’t able to do much on the inside in their fight in 2014.

Brook fought a smart fight, landed his straight right with authority, and was able to tie up Porter when he needed to.

With that being said, perhaps the rematch clause has nothing to do with a legitimate concern, but maybe Brook and his team are playing psychological warfare, with their potential opponent willing to fight in enemy territory.

Floyd Mayweather Jr. also had a rematch clause in place for the Robert Guerrero fight in 2013, but I don’t think it was put in place because Mayweather was worried about Guerrero.

I think Mayweather was trying to make Guerrero feel a little overconfident because when you look at the fight, Mayweather controlled the bout from the fourth round on; he had no reason to worry.

This could be the case with Brook-Rios. In my opinion, Rios’s style wouldn’t mesh well with Brook’s. The champion is a phenomenal boxer, and unlike Mayweather, he sits down on his punches.

If this fight doesn’t happen, I wouldn’t be surprised to see Shawn Porter get his rematch against Brook, potentially on the Mayweather undercard. How does that sound?