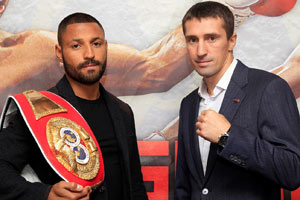 Kell Brook’s return from injury and bid to become world champion takes one step closer this weekend against former WBA champion Vyacheslav Senchenko.Brook’s injury issues over the last year have been well documented and have resulted in him missing out on his shot at the IBF title and Devon Alexander more than once.

Brook seems to have put these issues behind him and is determined to beat Senchenko and then go on and fight for the IBF belt next year. Brook will be the mandatory challenger again next year and provided he beats Senchenko a fight should be arranged.Brook aged 27 will face off with the 36 year old Senchenko in Kell’s home city of Sheffield at the Motorpoint Arena in a must win fight.

Brook will come into the fight with an unblemished 30-0 record with 20 knock-outs. Brook has looked a class above almost everyone that he has been in with to date and his only real test was against Carson Jones in their first fight.

Brook’s last fight was against Jones and Brook well and truly put the record straight with a dominant performance in which Jones never really got going. Kell did ease off as the fight went on though and that was disappointing because Jones was there for the taking earlier than he was stopped.

Brook will be looking for a more impressive performance this time out and I am sure he will rise to the occasion realizing that a mistake could destroy his title chances.

Senchenko will come into this bout with a very impressive record of 33 wins and 1 loss. The one loss on his record is to Paulie Malignaggi who has since lost the title to a rising star in Adrien Broner. Senchenko is a boxer who is well known to fight-fans in Britain following his fight with Ricky Hatton last year. Hatton was making a come-back to the ring after a few years out.

Hatton’s struggles outside of the ring during his time away from the ring are well-documented and despite putting up a good performance against Senchenko he just wasn’t the same fighter.Senchenko ended the fight with Hatton in devastating fashion with a ferocious left to the body that left Hatton writhing in pain. It was a great shot but it is debatable if the shot would have had such an effect on a man who hadn’t been out of the ring for as long as Hatton.

I am expecting the fight this weekend to be very competitive with both fighters determined to prove that they belong at the top of the sport and that they are deserving of a title shot.

For Senchenko this is also a must win fight. If he loses this fight than any chance at a world title again is surely over. A win over the undefeated Brook would really send a message to the world champions and would surely get him a shot soon.

I see Brook dominating the fight early on using his speed and superior natural boxing skill. I expect him to use a mixture of in and out tactics and then at times stand and trade. I then see Senchenko starting to come into the fight more in the middle rounds but being out-worked and out-skilled by Brook in the later rounds.

Kell will really want to put on a show and I expect him to do so and show just how talented a boxer he is. There have been a lot of excuses in recent fights but I don’t expect there to be any coming fight night. Kell is supremely talented and I see him winning via a late stoppage. I am looking forward to this fight as it will be a test and will show just where Brook stands as a top level boxer.