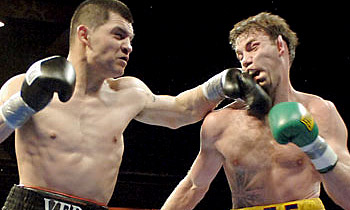 Every fighter has a fight that can make their career and build their bank account and for Bryan Vera that fight is just beyond the horizon.

Bryan Vera will take on Mexico’s Julio Cesar Chavez Jr. on September 28th at the Stub Hub Center in Carson, California in what will be his biggest step up in competition in his career. There is great risk and an even greater reward should he win that fight.

The fight was scheduled to take place earlier in September but due to a cut suffered by Chavez the fight was postponed.

“We only had four weeks to go,” said Vera. “They made it like he was cut, they tried to make it like, he is in Mexico he can do whatever he wants and they can make it look like anything. We got a call today saying that they moved it to the Stub Hub which was the Home Depot Center qon the 28th. Bob Arum told Steve Kim, they told my manager that we were going to fight him on the 28th. To me they are the ones that are running. If it happens again and there are changes then I am going to move on. I am going to give them one more shot and see what happens and hope everything goes right but I am going to stay ready.”

The fight may have been postponed due to a cut but in the minds of boxing fans is Chavez’ weight.

Chavez appeared in the ring with his younger brother Omar not too long ago and to be honest…the guy was huge.

Could his weight of been the real issue?

“He was still in Mexico trying to get into shape. I think they bought him a little bit of time cuz he is like 200 (pounds) or over.”
Postponements can get annoying for a fighter, especially if there is more than one.

“It’s frustrating as hell. We try to make camp fun and make it what it is,” said Vera.

Vera has a game plan which he intends to follow but feels that Chavez may not be too concerned about him going into the fight.

“I know they are taking me lightly. I am sure he is going to balloon up quite a bit but I think it’s going to make him more slugger than slug. To me I am not going to worry about it. I will outwork him and move around and make it a rough fight for him. He only takes advantage of people when they sit on the ropes and let him bang away on them. If you give him a little bit of bang or some bangs then the size is not going to matter. You can’t let him bully you. you have to be in great shape and step around him to frustrate him. You can’t just sit on the ropes and let him bang on you.”

Vera has fought at 168 before but has fought more at 160 so why would he take a fight with a physically bigger fighter at a higher weight? It’s simple…Chavez is moving up in weight as well.

” I haven’t had any problems at 168. I knew we were going to fight at middleweight but he is coming up too so it makes sense to me. I do plan going back to 160 after this. I’ll do it for Chavez because I know he is moving up as well.”

If Vera wins this fight, his options are limitless in who his next could be. Vera has been considered as an opponent for Gennady Golovkin in the past but the fight was never made.
Vera was asked about another middleweight who was offered a fight with Golovkin and turned it down and he seemed amused by what transpired.

Curtis Stevens was offered $300,000 to face Golovkin and turned it down stating that he was worth more than that; even though he lacked the accomplishments to back his statement.
Vera’s response to that, “Shit I would fought for half of that.”