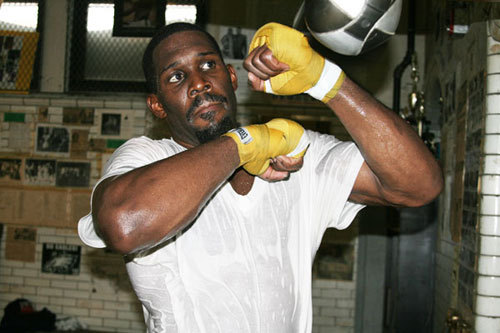 Bryant Jennings (18-0, 10 KO’s) will soon get into the ring with HBO Heavyweight brawler, Mike Perez (20-0-1, 12KO’s), Mike Perez made a name for himself November 2nd, 2013. On that date, Perez fought an all-action fight with Magomed Abdusalamov, a fight that ended with Abdusalamov being rushed to the hospital for brain surgery consequently ending his career.
Mike Perez’s next fight ended in a draw. A decline in performance many attributed to his significant battle with Abdusalamov. Bryant Jennings hopes to capitalize on the domesticated Perez.
Bryant Jennings will come to take advantage of Perez’s diminished potential.  “I’m trying to be legendary,” and claims he has “no shadow of a doubt” he’ll hand deliver Perez’s first loss.
Jennings, recently signed with Gary Shaw Promotions, believes Corpus Christi, Texas is his second home and will need every bit of support for his May 24th ‘Rumble on the Shoreline.’  “I received a lot of love from Corpus, lots of love from Texas.  May 24th will be an interesting night of fights as these two heavyweights hope to rejuvenate the lack luster division once claimed by the all time greats: Muhammad Ali, Joe Frazier, George Forman, and Mike Tyson.
Bryant Jennings hopes to defeat Mike Perez on the road to the WBA, WBO, and IBF Heavyweight Champion, Wladimir Klitschko.  Jennings believes a strong defense, a useful jab, will be enough to claim the win over Mike Perez.  Bryant Jennings claims he is a great all-around fighter.  The Rumble on the Shoreline will invariably showcase two hard punching heavy weights with their eyes on becoming elite figures on the sport of boxing and future Heavyweight Champions.
Tweet