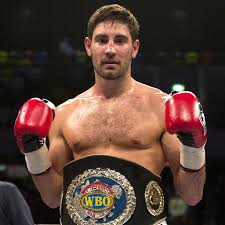 Frank Buglioni (17-1-1, 13 KO’s) is a popular super-middleweight from North London signed to British promoter Frank Warren. On September 26th, he will step up for his first world title challenge against Russian WBA champion Fedor Chudinov (13-0, 10 KO’s) at Wembley Arena in London, England.

The fight was meant to happen a few months ago only for the champion to renege on the date due to illness, but now it is back on to the relief of Buglioni, who told Boxing News Online he is not about to let this opportunity slip through his fingers.

“This is what every fighter dreams about; I am not going to blow my chance.”

One year ago you would be hard-pressed to find many fans to back Buglioni at the highest level. He suffered a first career defeat against the well-traveled, though dangerous, Sergey Khomitsky.

Buglioni’s defense has never been his strong point, and he wilted quickly when the Ukrainian began to land clean shots on him, eventually succumbing in round six.

Five wins and a draw since would seem to indicate he is back on form under the watchful eye of trainer Paschal Collins. Nevertheless, he remains a leaky ship.

Chudinov put a beating on Felix Sturm to claim his belt last May. It was Sturm’s second appearance at 168 lbs. after a draw with Robert Stieglitz, and now his long-felt presence near the pinnacle of the sport looks to be fading.

Chudinov calmly outworked him in his adopted backyard and now the 27-year-old looks to do the same to Buglioni when he travels for his maiden defense.

Buglioni for his part is not seeking the title alone. A win here will help him muscle into the conversation for fights with the premier British fighters at the weight.

“Once I pick up a world title belt all those big domestic clashes open up for me. I see myself on a level with those guys and a win against Chudinov will prove that.”

“However I am not looking past Chudinov. I’m expecting the toughest fight of my career, but you will see a career best Frank Buglioni on September 26, my preparations so far have been excellent.”

One problem for Buglioni is that should he win the title; he may be hamstrung in his attempts to fight the best super-middleweights in Britain because of his allegiance with Frank Warren.

IBF champion James DeGale, Paul and Callum Smith, Martin Murray and Rocky Fielding are all signed to Warren’s rival Eddie Hearn over at Matchroom Sports, and the two tend not to do business with one and other.

Remaining outside of the sphere of either party’s influence is WBC number one contender George Groves, who will take on Badou Jack for the belt on September 12th on the Floyd Mayweather vs Andre Berto undercard.

Groves is signed to the German-based Sauerland Promotions and so an idyllic unification with him would be the easiest route for Buglioni and Warren should they wish to go that way.

Based on past experiences Buglioni would bring confidence into the ring against Groves and is already planning his ideal scenario should that fight come together.

“It would be a great if we both win our world title fights. A unification fight him at Stamford Bridge in the summer would be a dream come true as we are both big Chelsea fans.”

“We have sparred a lot in the past, he is the quality fighter but I would fancy my chances.”

Groves is a far more dangerous opponent for Buglioni than Chudinov if only for the one-hit power he possesses, especially early on in his fights.

His journey also seems inextricably linked with DeGale’s and a unification rematch from their 2011 meeting is a sought-after affair that would likely take precedence for both over a meeting with Buglioni.

For now all Buglioni can do is nail down a win over Chudinov -no easy feat- and assess his options from there. It could well be he would prefer to make few title defenses before leaping in with the big dogs, who are more proven and polished than he.