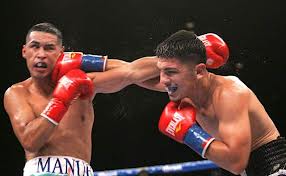 The Fantasy Springs Casino in Indio, California was rocking last night as they witnessed hometown Randy Caballero(16-0 8KO’s) take another step forward in his career. The undefeated Caballero was able to overcome a very tough and very game Manuel Roman. On the only televised undercard fight, Michael Perez survived a late push from Fidel Maldonado to score a shaky split decision.

In a fight where Perez was looking to again solidify his status as a top prospect, Perez won but his stock didn’t rise. Perez was able to take control the start the fight. He used his jab well and was dropping some decent body shots. It looked like he had some trouble with Maldonado being a southpaw because the left hand lead landed all night.

The action went up and down as the fight went on. At the midpoint of the fight, Maldonado had to turn on the reserve tank, he was tired. Just when it seemed as if Perez would cruise to a unanimous decision Maldonado flipped the switch and turned it up. From the 7th round on, I had Maldonado winning every round. He put a serious rally together and almost pulled off the upset by knocking Perez down seconds before the bell in the 10th. If he would have had a chance to get back on Perez he might have been able to stop him but the final bell rang.

Randy Caballero on the other hand took on his toughest opponent to date and proved he’s a keeper. He outclassed a very physical fighter in Roman from the opening bell. He retained his NABO Bantamweight title by keeping a steady dose of his jab in Roman’s face all fight.

A beautiful combination finished with a right hook sent Roman to the canvas in the 2nd round. He showed high intelligence by sticking to boxing and not wildly rushing in to finish off his opponent which would have given Roman openings of his own. Caballero was never in trouble, he fought a well disciplined tactical fight. Even in the late rounds when Roman put his foot on the gas Caballero never cracked. The final scores of 97-92, which was also my score, and 96-93 from the other 2 judges reflects the strong performance from Caballero.

Expect Caballero’s name to be called in a big time fight within the next year. Winning last night will move him up from his #6 WBO ranking and I can definitely see him with a belt around his waist within the next 2 fights.