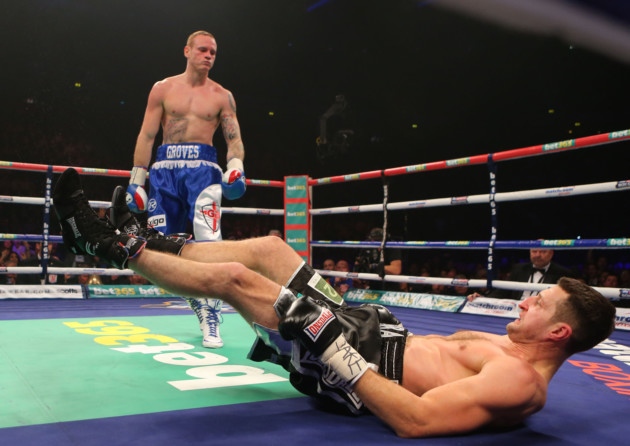 The best fight this past weekend, was not the Brandon Rios vs Manny Pacquiao mega event out in China.  It was the instant classic that Carl “The Cobra” Froch and “Saint” George Groves forged, out in the United Kingdom.  These two blokes upstaged the participants of the PPV fight, with their rousing performance. In a fight in which Froch tasted the canvas, in the first stanza and will forever be remembered as a horrible stoppage/gift win for Froch.

I was extremely surprised by the performance that Groves put forth.  No one knew that he would do that well, except for him.  He came out and did exactly as he proclaimed he would, many weeks earlier at a press conference.  “I’m going to meet you in the center of the ring, first round,” which he did.  Then he said “I’m going to win the jab exchanges,” he definitely did that throughout the fight.  Talk about walk the walk, this kid just made a huge statement the old fashioned way.  With his hands.

Froch on the other hand looked his age. He demonstrated that has a very stern chin, yet again.  However George was not afforded the same opportunity and could not show us, how good his chin is.  Although leading the fight by wide margins by most accounts, he was stopped in the ninth round. When Froch hurt Groves the referee jumped at the opportunity to stop the fight.  It could not have been more obvious that some strings were pulled, allegedly!  Kind of a bad ending if you ask me.

I can’t finish this column without giving Carl Froch some type of props here, after all he did win the fight. I was impressed by certain things he did, his chin, heart and perseverance.  Also his ability to slowly force George to fight his fight mauling and rough housing him brilliantly. Which created the opportunity for him to hurt George and for the referee to do “his job”, allegedly!  Carl has some tough decisions to make here, there is a ton of demand and outcry for the rematch.  However I’m not sure if he can beat Groves fair and square.