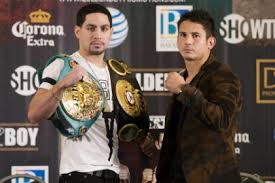 This Saturday night from Bayamon, Puerto Rico Danny Garcia faces Mauricio Herrera on Showtime in what will be a homecoming of sorts for the Garcia Klan.

The fighting pride of Puerto Rican roots runs deep in the sport of boxing. The once proud and best pound for pound island for producing champions has recently hit a rough patch of fighters to support at the world level.

Miguel Cotto will no doubt fill the Mecca of boxing to the rafters when he takes on lineal middleweight title holder Sergio Martinez on the eve of the Puerto Rican parade at the Garden.

The promising prospect Felix Verdejo is knocking on the door of stardom and soon enough will kick that door down in an attempt to fill the void left by Juanma Lopez’s once promising career.

With Puerto Rico’s current drought of champions Danny Garcia and Golden Boy Promotions are right on queue for some light to be shined bright on the 140 pound Champion.

How ironic is it that Danny was able to secure a fight in P.R. but has yet to land a big fight at a venue in his hometown of Philadelphia. In the current state of boxing where building a local fighter is rare why not raise your profile amongst such a rabid fan base.

It helps that Danny’s parents both were born in Puerto Rico so he has that countries’ blood running through his veins. With his fighting style he may be able to capitalize on this opportunity and build on the wave of momentum that he created by beating back Lucas Matthysse, who had been transformed into a Goliath type figure by the media and fans in the forums.

How crazy would it be if boxing fans from P.R. when catching up with their love ones in New York City, spread the word enough about Danny to the point that they support him with more numbers for his next fight at the Barclays Center in Brooklyn.

One thing that has been missed in the lead up to this event from both the fans and media is Garcia’s opponent Mauricio Herrera. Most look at his knockout ratio, a dreary seven, a recent fight against Karim Mayfield and just assume that Herrera will be a walk in the park for Danny “Swift” Garcia. A few somewhat known scribes went as low as referring to Herrera as a tomato can or worse.

Using only the Mayfield fight is a mistake. To not include or overlook his full body of work which includes a close distance loss to Mike Alvarado and a win over Ruslan Provodnikov, who set the world on fire in his performances versus Timothy Bradley and Mike Alvarado, is just flat out ignorant as a scribe.

The triangle theory comes into play time and time again. In fact just last week Canelo, Angulo, and Erislandy Lara showed us why every fight that is made can have different outcomes based off the style match up.

My point being it wasn’t luck that helped Mauricio defeat Provonikov, it was skill. Case in point, I defiantly think along with everyone else that Timothy Bradley could go from ding to dong without losing a round if he fought Herrera.

That said the style matchup and game plan that unlike Bradley, Herrera stuck to enabled him to beat Ruslan much cleaner. And to keep a powerful puncher like him off of him, it speaks loudly to Herrera’s skill as a fighter and tells me he also has enough pop in his punches to keep his opponent honest.

For all you gambling degenerates out there (including myself) at anywhere from 6 to 1, all the way up to 8-1, Mauricio Herrera is a live dog that will do more than just bark.

Speaking of skill you can make a case that both fighters’ skills are under appreciated. Danny Garcia has improved in a variety of ways on his path to greatness at the junior welterweight division.

The subtle things he did in his much hype fight with “The Machine” were the difference between winning and losing. After taking some punishment early in that fight, Garcia stayed patient and stuck to a subtle yet effective plan.

He moved around just enough not to give Matthysse an easy target. He went to the body more and used short clinches on the inside to smother his opponents work. Instead of trying to land one big game changing punch like Lucas, Danny was in and out mixing up his combinations. Garcia has shown patience and skill in his fights with Kendall Holt and the first time around with fading legend Erik Morales.

We can talk about skill all day long but one thing is certain, Danny Garcia and Mauricio Herrera should gives fans plenty of entertaining moments. With much buzz generated from the announcements of many big names fighters this spring and summer this card has been neglected a bit.

The main event may start at a mild pace but it won’t take long until we see blood. Danny has been known for being a slow starter something Herrera must take advantage of early if he has any real chance of pulling off the upset without a knockdown or knockout.

Herrera has a nice jab that could help his case for success in the early goings. He will have to be on the move in order to not duplicate some past mistakes when facing top level competition which got him in to some trouble when trapped on the ropes.

If Herrera, who has a habit of getting into exchanges, sticks to the plan he might be able to outbox Danny Garcia with movement, work rate, and clean punching, winning the ring generalship part of the scoring system.

Body work will be very important for both men with Garcia seeing the benefits more from slowing his man down to the body making him a more stationery target.

Danny Garcia also has a good jab and I expect him to inch forward enough to be able to execute at a high level by the third or fourth round. Once he is able to cut the distance look for those lefts hooks to the body and to the head to come off of his Garcia shoulder like a shotgun when his shot hits his opponent.

I don’t see how this fight could be boring. Both fighters when hurt know how to hold yet that hasn’t stopped them from firing back when pushed to the brink. Based off their resumes both fighters have solid chins with Garcia having the edge in power.

This fight could play out in similar fashion to the Holt and Morales fights for Danny Garcia. I anticipate Herrera will jump out to the early lead if not on the judge’s scorecards, then at least to the naked eye.

Garcia will take some punishment as usual to get inside and when he gets the right distance he should begin to dominate in the mid to late rounds. Danny Garcia will be able to control the fight. The rounds will still feature plenty of back and forth action with Danny landing the bigger punches with more volume as the fight wears on. Mauricio Herrera will show up making this a tougher test instead of just showcase for “Swift.”

My official prediction is Danny Garcia by Unanimous Decision.  Unless the fight is stopped by the ref or ringside doctor Mauricio Herrera will finish this fight on his feet. It’s worth mentioning the slight chance of Danny being over aggressive in trying to earn the respect of the Puerto Rican fans hoping that they will adopt him as their champion.

The undercard starts on Showtime Extreme with a rematch fight that came out of left field between Juan Manuel Lopez and Ponce De Leon. It’s difficult to get a gauge on this fight based off the results of the first fight and the recent fall of Lopez.

One has to go back to how they felt right before the first fight in order to remain open minded about the second clash. If this was the co-feature I would be disappointed but this fight is a great style matchup as a lead of and of course makes all the sense in the world to have Juanma on the card in his home country.

My official prediction is Ponce De Leon by late TKO. Lopez has taken more beatings and has fallen further than De Leon, who some say beat Broner at 130. Also he was in the fight until the somewhat controversial early stoppage against Abner Mares. Either way this scribe wouldn’t be surprised one bit to see both men kiss the canvas.

Speaking of kissing the canvas, the big question in a fight with Deontay Wilder is how long Malik Scott will last before he takes a trip to the mat? My guess is mid to late rounds. Scott’s jab and movement might buy him some time before Wilder lands one if his haymakers.

This fight could be slow but ultimately will heat up possibly giving us more answers about Wilder. Add in the Canelo vs. Angulo PPV replay and this quadruple header should get plenty bang for the fans hard earned buck.