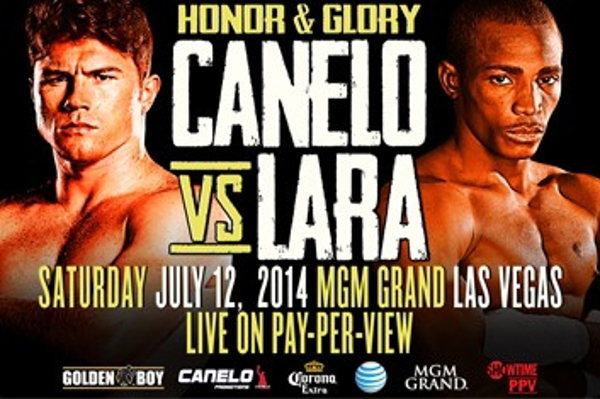 It was the most in-demand fight the fans could conceive of, at least the one that the powers that be could actually make, and yet, it was not as exciting when Saul “Canelo” Alvarez and Erislandy Lara actually got into the ring in front of an extremely pro “Canelo” crowd at the MGM in Las Vegas, Nevada.

The headline was “Puncher vs. Boxer” and the big question was whether or not Canelo was a big enough puncher to stop Lara from picking him apart, not necessarily stop Lara — although it was the only outcome some could foresee that would give Canelo a chance to have his hand raised at the end of the night — but prevent him from running away with the fight.

However, it wouldn’t be enough for Canelo to just not lose; he also had to find a way to win rounds, multiple rounds, rounds in succession.

The fight started off with Lara establishing his dominance and exuding his superb craft by moving well and catching Canelo on the end of some superb counter shots. He was throwing well-placed and well-timed combinations, three and four punches at a time.

Lara wasn’t overly active in the first few rounds (but it would turn out to be Gatti-like by comparison to his later activity) but he was cementing his fight and separating himself from Canelo.

Canelo was not closing the distance and staying in Lara’s range, when he did let his hands go they were wild hooks to the body, longwinded and futile. Lara, on the other hand, was picking his shots and moving. His success was more defensive, but was getting out quick enough so as to not be in Canelo’s sweet spot and the fight was becoming more about what Canelo was unable to do.

The fourth round is when the tide began to turn for Canelo as he found a way to close the distance between Lara and himself.

Canelo began landing hard shots to the body, but Lara was still moving well and never got tagged with anything that put him in danger.

A mouse began to hover over Canelo’s right eye in the middle rounds and Lara was cut in the 7th round after a Canelo uppercut. Canelo had clearly closed the gap created by Lara in the earlier rounds, but Canelo was still not in a dominating position, nor was he in any type of significant position to suggest he was taking over the fight as Lara continued to box and land hard shots on the move.

As the fight progressed, it became more about what Lara wasn’t doing as opposed to the success either fighter was finding.

Canelo was focused on doing work to the body, but was unable to really hurt Lara. Several times in the later rounds Canelo worked himself to the inside and would unload a flurry of body shots, it didn’t seem to slow Lara down a bit but it was more to show the judges he was working while Lara was less than engaging.

The 12th round was another swing round to add to the list, Lara boxed beautifully and Canelo gutted out some last minute heroics. Neither fighter the clear winner of the 12th, and yet both did a little of what they do best, the theme of the night.

There was some debate on social media in the aftermath of the fight and there were plenty who saw the fight for Lara, while some were more than satisfied with the win going to Canelo. Mostly, people were conflicted with judge Levi Martinez’s 117-111 scorecard.

It was definitely a questionable scorecard, but the fight was close enough that a robbery is simply out of the question. Lara didn’t do nearly enough to claim he was the outright victor, and yet you can make an argument for Lara winning the fight. Canelo’s win should not be tarnished in anyway and the split-decision was an appropriate outcome for a fight in which both men displayed tremendous talent.

While both men showed great skill and heart, they did not give a great fight. I don’t think neither fighter is to blame, it was just a bad clash of styles (cue the “styles make fights” sound bite) and I’m in no hurry to see a rematch.

I don’t think you can blame them for the lackluster fight, but if Lara doesn’t get a rematch anytime soon then he has only himself to blame. You can go in the ring and fight your best fight– no one can blame you for that — but when you don’t make an exciting fight and then expect the fans to demand a rematch you shouldn’t be surprised when we don’t.

The fight wasn’t exciting and it wasn’t a robbery, it was a closely fought contest between the division’s two best fighters. Once the shock wears off for those convinced Lara was too superior for the likes of Canelo, they will realize that it is better for the sport when Canelo is matched up with come-forward fighters and Lara is better when he can feed off the aggressor. Those are the fights I want to see next.

Thaboxingvoice.com scored the fight 115-114 for Canelo.

Abner Mares was victorious in his comeback against Jonathan Oquendo. Mares was badly cut in the fight, but he weathered the storm to win a unanimous decision against a game Oquendo.

Vargas got Lopez to do the one thing he knew he shouldn’t, fight Vargas’ fight. Once Vargas got Lopez to open up the fight turned very dramatic, both men throwing punches in bunches, but it was Vargas who got the better of the exchange, sending Lopez to the canvas at the end of the 3rd round and after conferring with Lopez’s corner referee Vic Drakulich stopped the fight in between rounds.

There was plenty of action in the Herrera-Perez fight and both men had their moments. Perez, who was behind early in the fight, rallied in the middle rounds by putting Herrera’s back against the ropes and unloading a flurry of punches. But Herrera did enough early and gained control back again to win a majority decision victory.