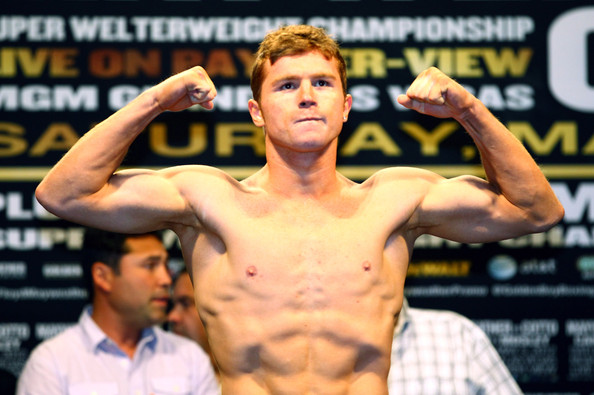 Saul Alvarez is 1 of the rising stars in the sport. If you were watching him for the 1st time, you would see a red haired, fair skinned, muscular built guy, and you would think he was Irish. However, the man they call “Cinnamon” was born in Guadalajara, Jalisco, Mexico, and is very proud of being Mexican and his Mexican heritage. Ironically, his next fight will happen to be on the same night as arguably the only Mexican fighter on his level in terms of popularity, Julio Cesar Chavez Jr, the son of the all time great Mexican legend, Julio Cesar Chavez Sr.

On September 15th, Saul “Canelo” Alvarez will be squaring off against Josesito Lopez for the WBC Light Middleweight Title currently held by Alvarez. This fight was originally supposed to be on pay-per-view, but as opponents for Canelo either got hurt, Paul Williams and James Kirkland, or lost, Victor Ortiz, the fight was understandably moved towards regular Showtime. Even though this is not what Golden Boy Productions had in mind, it does make sense to not try to battle PPV vs. PPV with the Sergio Martinez vs. Julio Cesar Chavez Jr. fight.

Alvarez started boxing at the young age of 13, by age 14, he already won a silver medal at the Junior Mexican National Championships, and then by age 15, he had won the Junior Mexican National Championship. Later on that year after 20 amateur bouts in 2 years, Canelo turned pro in 2005 at the young age of 15. Since then over the next 6 and half years, he has ran off a 40-0 record with 29 KOs, most of the wins against subpar opponents, but that seems to be the norm in boxing nowadays for young boxers that their promotions want to protect.

At this time last year, Canelo’s most known wins were against the lower tier brothers of Rickey Hatton and Miguel Cotto, as at age 19 he defeated Jose Cotto by TKO.  At age 20 he defeated Matthew Hatton, which was for the vacant WBC Light Middleweight Belt, which he currently has now. Since then, his competition has slightly gone up as he faced a good solid vet in Kermit Cintron and then the future hall of famer Sugar Shane Mosley. The downside to those 2 fights is Cintron was 32 and is on the downside of his career. While Mosley is 40 and the best thing about him is no one can knock him out.

Now just when it seems that Canelo will get over the hump in his career, headline a PPV, face a quality opponent, and at the age of 22, turn into a top 5 PPV type person, everything breaks down. He will be facing an opponent who no one thinks will win, in Josesito Lopez. The people hyping the fight will say, “Well, Lopez wasn’t supposed to beat Ortiz and look what happened there.”To that, I say it’s a completely different situation. Lopez is a 140 lb fighter that fought at 144 for a 147 fight because he said he wasn’t going to go above what he felt comfortable.

So now you are telling me that a natural 140 fighter, that doesn’t feel comfortable above 144 will now fight a guy who is naturally bigger than 154 and is more controlled than Ortiz? I don’t see it, Canelo should wear his naturally lighter opponent down and I don’t expect Canelo to get hit with 3 uppercuts per round to break his jaw like what happened with the defenseless Ortiz.

The biggest question for all of us will be what does Alvarez do after this fight? Will he finally get that big PPV fight against the big time opponent? The name that makes the most sense, purely because he has been on his cards and he has called him out several times is Floyd Mayweather. In a fight like that, I think Floyd is too fast, too skilled, and too experienced to lose. However, I also don’t think that Floyd will be able to KO the younger, stronger, and naturally bigger Canelo. So I’d say Floyd wins by decision.

Another direction for Canelo could be fighting James Kirkland, a rising Gabe Rosado, an experienced K9, or an extremely skilled Cuban who has been calling out Canelo on twitter, Erislandy Lara. Just this week alone Lara has said Canelo is “scared to death” of him, and called him a “fake champ”. This is a matchup I’d love to see as real boxing fans know the skill of Lara and if Canelo could defeat him,  no one else could ever challenge his level of competition.

The name of Canelo Alvarez should be on its way to taking the baton from the Floyd Mayweather’s and the Manny Pacquaio’s of the sport. But to do it, he must take 1 step at a time because as we all know in boxing, things are easier said than done.