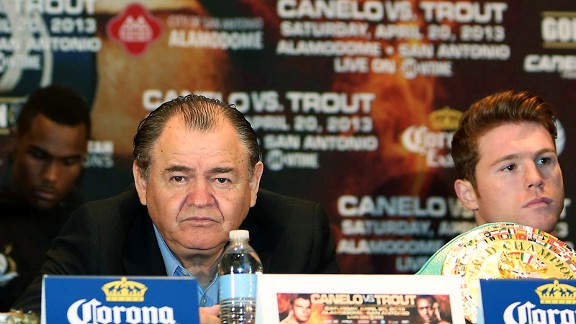 The promotion for ‘The One’ Mayweather-Canelo has kicked off and plenty of media has been in the face of both fighters asking a multitude of questions. Most of the brunt of the questions by the boxing media was the agreed upon 152 lb catch weight. ThaBoxingVoice.com spoke with Jose ‘Chepo’ Reynoso, the trainer of Canelo Alvarez in regards to the catch weight.

While it may only be two pounds to us, every pound counts when it comes to boxers. So when the announced catch weight was announced, there was some concern from some that Canelo may not be at his best for the fight. But Chepo says everything will be fine.
If the team thought it was a problem, we wouldn’t have agreed. We agreed because we still think he’ll have his speed and his power. His speed will be a very big part of our plan and I think we’ll still have it at 152.”

In his last bout at 154 lbs, Canelo defeated Austin Trout in front of 40,000 fans in San Antonio. In spots during that fight, Canelo looked gassed. But Reynoso says that was one fight and every fight will play out differently.

“The fights go according to the fighter and opponent. We tried to win fights differently sometimes the knockouts don’t come and fact of the matter is, he was against a very long slick southpaw, who had the reach distance. He was a complicated opponent but we were happy with our performance before coming into this fight with Mayweather.”

If Canelo is victorious, the options for team Alvarez will but unlimited but Reynoso says first things first, “The most important thing is to win, after we win, we’ll figure the rest out.”