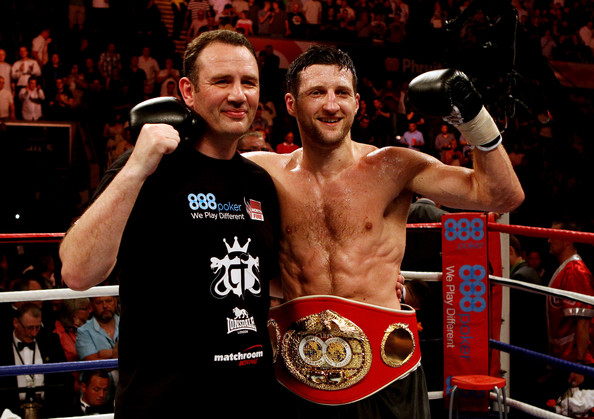 We hear fighters say all the time they will fight the best, but let’s be honest do they really? The one man that has been doing that has been Carl “The Cobra” Froch. For the last 3 years, Carl has been kicking ass and taking names. Name one fighter that has fought all these names: Jean Pascal, Andre Ward, Jermain Taylor, Glen Johnson, Lucian Bute, Mikkel Kessler, Andre Direll, and Arthur Abraham. Wow!

The title of the event was called “No Way Out”. There was no way out for Bute and there was no way he was leaving Nottingham, England with his title. Froch destroyed Bute in 5 rounds. The man from Nottingham was crowned champ for the third time.

There is nothing flashy about Froch. He has always been an over-achiever, He’s not going to be the fastest or the tallest boxer in the world. But what he is going to do is give it 110% every time he steps in that ring. Maybe 110% doesn’t give the man his just do. If you realize what he has accomplished with his lack of skill, combined with a late start in boxing, it is amazing. Not only that, but his best attribute is his willingness to fight the very best. While the sport has become a boxing business based on pay-per-view numbers and cable money, he’s a throwback to the old timers. Maybe if we had more Carl Froch’s in boxing, the sport would be in a better place.