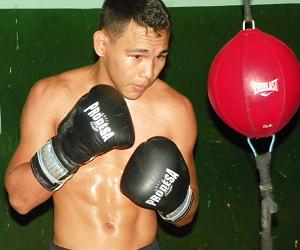 Carlos “Chocorroncito” Buitrago seemed relaxed as he boarded a plane yesterday for a long flight to the Philippines for his first world title fight that is set to take place on November 30th against Merlito Sabillo.

“I am going to the Philippines full of confidence,” said Buitrago. “I am ready to win the fight and bring the regular 105 pound belt home. My goal is to put the name of country up high so I trained very hard to show that off.”

Buitrago has had a tough training camp to prepare him for the battle ahead. He has had very intense sparring sessions with Roman “Chocolatito” Gonzalez which has helped him in the past and should help him for his future.

“I know that my fight in the Philippines will not be easy but I am confident in my abilities. I will take initiative from the opening bell. I have more power in my punches and am faster than Saabillo so I can impose myself on him anyway I like.”