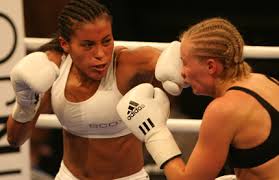 Cecilia Brækhus (26-0, 7 KOs) and Jennifer Retzke (15-1-1, 9 KOs) both attended the final pre-fight press conference today ahead of their WBC, WBA, WBO & IBF Female World Welterweight Championship fight at the Falconer Hall at the Radisson Blu in Copenhagen on Saturday night.

Brækhus will be defending the titles she unified with a historic victory over Ivana Habazin in September. As she prepares for her next challenger, “The First Lady’ is confident her undefeated record will remain intact.

“I always respect my opponent, but there’s no doubt that I’m the better boxer and that’s what you’ll see on Saturday,’’ said Brækhus. ‘’I’m 100 % focused. I will defend my belts in style and show that I’m in a different league to Jennifer.’’

Retzke has worked her way up the rankings, becoming IBF mandatory challenger, and earning a shot at the pound-for-pound number one. “I have prepared more for this fight than I have ever done before,’’ said Retzke. ‘’Fighting the pound-for-pound number one requires something special. Cecilia may be the best in the world but the world should prepare for a big shock on Saturday night.’’

Brækhus will have renowned German coach Otto Ramin in her corner for a fourth time. Ramin, who has guided Brækhus to victories over Myriam Lamare, Jessica Balogun and Ivana Habazin, is wary of the danger the German challenger poses.

“Jennifer is similar to Cecilia’s last opponent Habazin, but maybe a little stronger and a little more compact,’’ said Ramin. ‘’She will need to pick her shots carefully in order to stay out of trouble. It will be a tough fight, but Cecilia is a great boxer and on Saturday she is going to show just how attractive female boxing can be.”

Promoter Kalle Sauerland is looking forward to Saturday night’s action. ‘’It is all always something special when the number one in the world is fighting,’’ said Sauerland. ‘’When you watch Cecilia fight, you are watching boxing history. It has been long journey but Cecilia has proven time and time again why she is the best in business. It is my belief that she could one day retire as an undefeated champion.’’