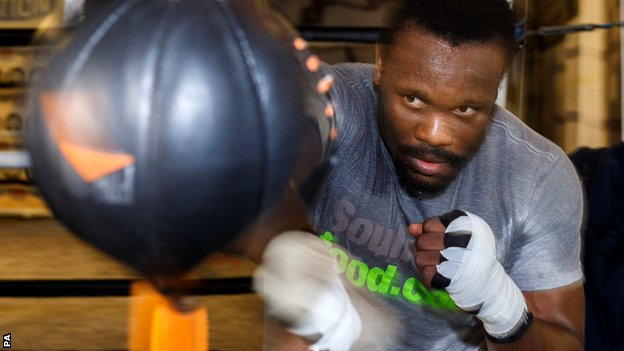 This weekend Dereck ‘Del Boy’ Chisora looks to take one step closer to a world title shot with victory over the veteran American heavyweight Kevin Johnson.

Chisora aged 30 is a man who has improved greatly over the last couple of years and appears to have really have matured. He realises that he has to be in a good place physically and mentally and has really knuckled down.

Chisora has lost a lot of weight and comes into the ring in the sort of shape that you expect from a professional boxer. He is tough, rugged and a high pressure fighter. He walks forward forcing his opponent to work and will head into this fight as the favourite.
Johnson is not to be written off though as he is a good boxer. Aged 34, Johnson holds a record of 29 wins, 4 losses and 1 draw. Johnson is a slick defensive boxer who can make his opponents look bad and can spoil well.
Johnson has been in with the likes of Vitali Klitschko and Tyson Fury in the past and went the distance with both men. Johnson has stepped in a relatively late notice for Andriy Rudenko and may not be at his best as a result but he will still provide a stern test for Chisora.
Chisora has a lot at stake in this fight and he cannot afford a defeat. He is being lined up for a blockbuster domestic dust-up with Tyson Fury this year. This rematch would be a highly anticipated one with both men having been so controversial in their careers to date. Both men have improved significantly since Fury’s win when they last met in 2011.
Chisora will have to make sure that he doesn’t look past Johnson as Johnson is a dangerous opponent who could easily pick up the win if Chisora isn’t on his game on the night. The fight will also make for interesting viewing with the Fury fight in mind. Fury outpointed Johnson in 2012 and it will be fascinating to see how Chisora fares against the same man. Of course styles make fights and Chisora and Fury are very different it is still interesting to see how Chisora competes against Johnson.
Chisora sees this year as a massive one for him that can propel him right up there in the world rankings and lead to a world title shot. Chisora is aware that Johnson stands in his way of progressing onto that level and will be extremely determined to win.
Chisora would appear to be the favourite heading into the fight and I expect him to come away victorious on the night via a unanimous decision. Johnson is a tough veteran fighter and Chisora isn’t the biggest puncher so to predict a knock-out may be too much.
Tweet