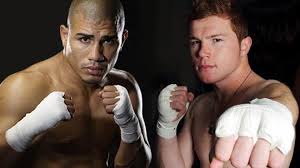 With all the mullings of the Mayweather-Pacquiao negotiations, the other major fight that’s still being negotiated is the Miguel Cotto-Canelo Alvarez negotiations.

“I’ll say that we are talking,” Penagaricano told Michael Woods, “But not close to an agreement. Sorry to be so brief, but I normally do not like to comment during ongoing negotiations.”

Steve Kim got a word with Bob Arum in his column with Boxingscene.com where the plan is still for Cotto-Canelo to be on May 2nd.

“I met with Oscar De La Hoya and had a talk with him. Oscar’s talking to Canelo, hopefully we’ll come closer to a resolution,” stated Arum who said the fight will take place on Cinco De Mayo.

Arum says Las Vegas and Texas are the frontrunners to land the fight even though Dallas’ AT&T Stadium has an event on May 2nd, Arum hopes it can be worked out because Jerry Jones is willing to pay for the bout to have it in Dallas.

“They’ll exceed what Vegas can put up and both fighters are saying wherever we can earn the most but the problem with Cowboys Stadium is that they have another event on May 2nd.”